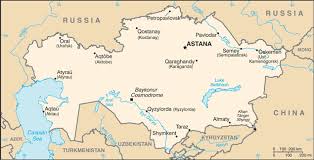 September 12, 2016:    Yklas Kabduakasov is an Adventist serving a two-year prison term in Kazakhstan for personal witnessing activities which are supposed to be protected by the religious rights law in the former Soviet republic in central Asia. He is being held in a prison camp in Pavlodar and wishes to be transferred to a prison nearer his home in the city of Astana, reports the Forum 18 human rights organization based in Oslo, Norway.

“Yklas lodged an appeal on May 29 to be transferred to an open prison, which would be near his home town,” Pastor Andrei Teteryuk told Forum 18 on July 21. “But they refused to even accept the application, telling him he has not generated any rewards and softening his terms of imprisonment can’t be considered. When he asked them to explain why it can’t be considered, they responded: ‘It just can’t, that’s all’.”

The Kabduakasov family bank account has been blocked. “His wife said her bank card had been blocked, but we don’t know if this was connected with his inclusion in the List,” Teteryuk told Forum 18 in June. The “List” he referred to is the Finance Ministry Financial Monitoring Committee List of individuals “connected with the financing of terrorism or extremism,” a tactic that Kazakhstan has learned from anti-terrorist efforts of the United States government; publishing a list of known terrorists and suspects that banks must freeze their funds and stop all financial transactions.

Kabduakasov was convicted under Criminal Code Article 174 (Part 1) in December 2015 as have been 31 Muslims since then, all accused of “extremism.” These cases were initiated by the National Security Committee (KNB) secret police, according to the Forum 18 News Service. The Muslims are accused of being members of Tabligh Jamaat, a conservative movement that reaches out to the generally more secular Muslims in Kazakhstan and has been labeled “extremist” by the KNB.

If you wish to do something to help Kabduakasov, one option is to write to the Kasakhstan embassy in your country. Amnesty International has information to assist you at:    https://write.amnestyusa.org/?ac=none_r     The graphic displayed with this story is a map showing where various prisons are located in Kazakhstan compiled by prisoneralert.org.