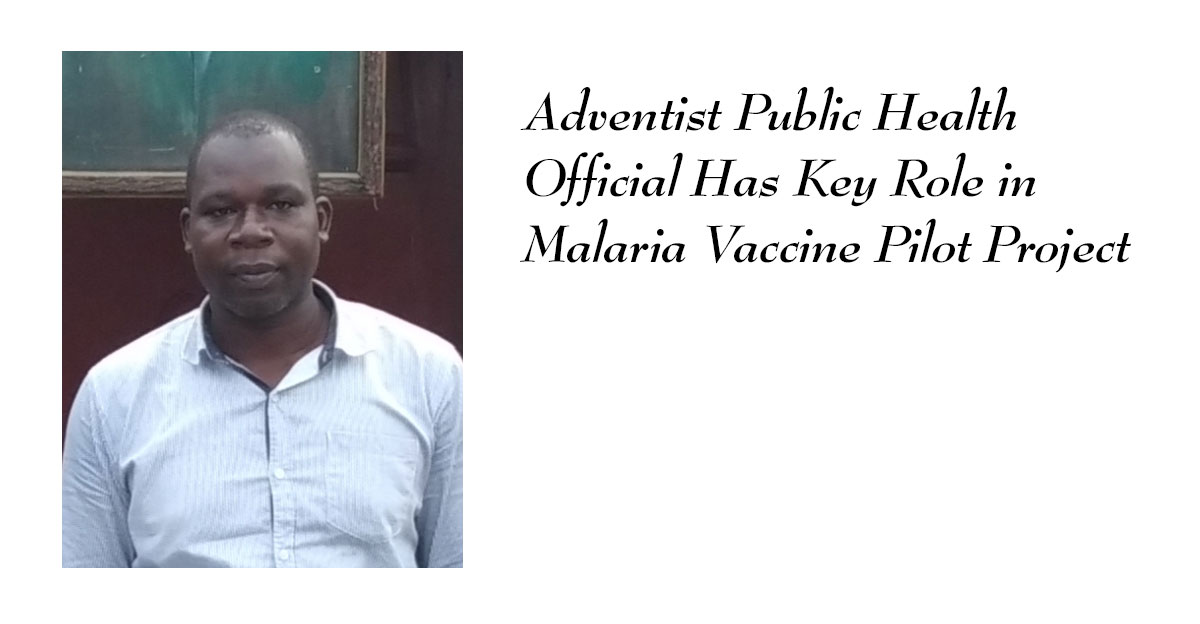 By Tyson Jacob, 30 January 2020 | The World Health Organization (WHO) has selected three nations in Africa where the world’s first malaria vaccine is being tested: Ghana, Malawi and Kenya. The government of Kenya launched the vaccine in Homa Bay County, with a population of about one million.

Robert Bonyo is an Adventist who is a malaria control coordinator in the area and has a key role in the pilot project. He attends the Sophia Seventh-day Adventist Church and has been a local church officer in the Migosi congregation in the past. He told Adventist Today that his work has been made easier by support from Adventist friends in the department he leads.

Michael Majiwa, a county health promotion officer, told Adventist Today that Adventists have always supported vaccination efforts, including campaigns to prevent polio and other diseases. “There was the time when we had tetanus vaccination and Catholic leaders banned their members from participation and preached against it, which gave us a great challenge. But the Adventists have never been any challenge, and this region has a large population of Adventists. Many of them work for the county department of health and do a good job,” he added.

Asked about the public reaction to the new malaria vaccine Majiwa said that because it is a new thing it was expected that people would be fearful, but malaria is a deadly disease, so the vaccine is important. “But the vaccine is not a stand-alone intervention; we encourage the community to use mosquito nets, spraying, the pre-cure for pregnant women and malaria check ups.”

Bonyo told Adventist Today that malaria is a major problem in the region, as it is the number one cause of illness and number two in mortality after HIV. The new vaccination is only done to children under two years of age, and once vaccinated the child must return after six months and again at seven months, nine months and 24 months to complete the vaccine.

What has been the impact so far? Majiwa said it is still early to know; the evaluations will be done after the four doses are completed. “Our monitoring and interventions will focus on which area we need to target the most and ensure we settle the challenges.”

Can the vaccine be expected to be a 100 percent cure to malaria? Banyo said, “The chances will be reduced to 70 percent, and that’s why we encourage the use of other methods like mosquito nets, spraying, etc.”

Why are children and not adults included in the pilot project? Majiwa said the burden of malaria is on children, but with adults we continue to insist on the other interventions.

WHO is providing training and consultants for the project, with funding from the United States Aid Agency (USAID). Community health centers are administering the vaccinations.

An Adventist Today reporter visited the Makongeni health facilities and witnessed the ongoing treatment which is slowing down because almost every child in the area has been covered. Dr. Jacob Otieno is medical superintendent in Makongeni hospital. He told us how successful the program has been and said they have never been short of the vaccine. “We are optimistic that it will be helpful in the this community and the end result will be a success,” he added.

Venidah Amondi is the nursing officer for the Makongeni hospital. She told Adventist Today that the program started in September last year and due to the ample number of nurses in the hospital, the program has been successful. “There have been some cases reported where the parents witness fevers in their children after vaccinations, but we have been here to calm them and tell them it is normal.”

Julius Osongo is the head deacon at the Makongeni Adventist church, and he told Adventist Today that the congregation is happy with the vaccination campaign and has given the maximum support needed. “Many of our members work for the ministry of health [and] others have been active in assisting in the community … including this malaria program.”

Thirty years in the making, the vaccine is a complementary malaria control tool to be added to the other measures recommended for malaria prevention, including the routine use of insecticide-treated bed nets, indoor spraying with insecticides and timely access to malaria testing and treatment.

The malaria vaccine has been through several stages of research and development, including a testing period in a clinical facility. It is the first and only vaccine to significantly reduce malaria in children. Malaria claims the life of one child every two minutes around the world. The disease is a leading killer of children younger than five years in Kenya.

The Kenya government’s Ministry of Health is starting the vaccine’s introduction in areas of high malaria transmission, where the vaccine can have the greatest impact. Other areas will be phased in as health professionals learn from the early phases of the project.

“Africa has witnessed a recent surge in the number of malaria cases and deaths. This threatens the gains in the fight against malaria made in the past two decades,” said Dr. Matshidiso Moeti, the WHO regional director for Africa. “The ongoing pilots will provide the key information and data to inform a WHO policy on the broader use of the vaccine in sub-Saharan Africa. If introduced widely, the vaccine has the potential to save tens of thousands of lives.”

The goal of the pilot projects is to vaccinate about 120,000 children per year in Kenya across eight counties: Homa Bay, Kisumu, Migori, Siaya, Busia, Bungoma, Vihiga and Kakamega counties. Within each county, some areas will introduce the vaccine first while others are expected to introduce it later.

Bonyo told Adventist Today that his Adventist faith makes this project important to him. He said he is doing his best to control malaria “through Christ who strengthens me.” Overcoming the suffering and death caused by major health problems has long been a key part of the Adventist mission around the world, so it is not surprising to find Adventist health professionals like Bonyo involved in this important project in Africa.

Tyson Jacob is a reporter for Adventist Today based at the University of Arusha in Tanzania. The photo is of Robert Bonyo, a county malaria control coordinator in Kenya and a member of the Adventist denomination.