We often forget Christianity is actually a religion founded in the Middle East – not Europe. Jesus, if He were here today, might well be stopped at the airport. Yet why do we struggle with this confusion of Western culture for biblical principles? How far do we take Paul’s example of accommodating local tastes, being a Jew to the Jews and a Greek to the Greeks (1 Cor. 9:20-22)? Would we follow Paul’s example of quoting pagan poetry to the Athenians (Acts 17:16-34)?

These issues become especially important when we consider Jesus” great commission, to take the gospel to the whole world. What do we Christians do about the Middle East, full of Jews and Muslims less than open to the Christian message? About 25% of the world’s population, or nearly two billion people, live in countries virtually impenetrable to Christian missionaries. We are actually going backwards, as those remaining Arab-Christians flee the Islamic State and Al Nusra. One radical answer has been the “contextualization” or “insider movement.”

Hidden Christians and the insider movement

The insider movement has been defined as:

any movement to faith in Christ where (a) the gospel flows through pre-existing communities and social networks, and where (b) believing families, as valid expressions of the Body of Christ, remain inside their socio-religious communities, retaining their identity as members of that community while living under the Lordship of Jesus Christ and the authority of the Bible.[1]

John Travis, who has lived in Muslim communities for over two decades, expands on these ideas through the concept of a C1-C6 Christ-centered Community scale.[2] A C1 church is basically Western, with adherents calling themselves “Christians.” A C6 person is the opposite extreme, where belief in Jesus is kept totally secret, usually out of fear of persecution. C5 is often the goal for many missionaries in Muslim countries, where converts:

retain their legal and social identity within their Muslim community. They reject or reinterpret any part of Islamic practices and doctrine that contradicts the Bible. They may or may not attend the mosque regularly, and they actively are involved in sharing their faith in Jesus with other Muslims. They may call themselves “Muslims” who follow Isa al-Masih, or just Muslims. They may be viewed by their community as Muslims that are a little unorthodox.[3]

Can there be such a thing as a Jewish-Adventist?

Messianic-Judaism is probably the best and most successful example of an insider movement. From humble beginnings in the 1960s, there are now something like 350,000 Messianic-Jews worldwide.[7]

Within the established boundaries of the official SDA organization there is also a growing recognition of distinct “Jewish-Adventist” identity, with worship in a more traditional Jewish style. While there were no specific Jewish-Adventist congregations in 1990, there are now about 40 worldwide.[8]

Can there be such a thing as a Muslim-Adventist?

What about Muslims – is the idea of a “Muslim-Adventist” an oxymoron? We probably realize the term “Jewish” can denote an ethnic-racial descriptor, allowing for “Jewish-Adventists” if not “Jewish-Atheists.” However, we usually only see Islam in wholly religious terms – an identity of belief rather than ethnicity. As Gary Corwin points out, that view is naïve, because Islam is as much a cultural designator:

There was a Muslim who had listened to evangelistic radio broadcasts. When he was visited by a missionary, he prayed to receive Jesus Christ. He then excused himself to go to the toilet, but stopped in mid-step to ask, “What should I say now when I enter the toilet?” He assumed that Christianity had a custom for every detail of life.[9]

What Muslims generally agree on with mainline Christians

For those unfamiliar with Islam, we probably have much more in much in common with Islam than we realize. In agreement with most mainline Christians, Muslims believe:

The five pillars of Islam and the Bible

Even the five pillars of Islam have comparable roots in the Bible:

What Muslims more specifically agree on with Adventists

Amongst major Christian denominations, Adventists are the most naturally aligned with Muslims:

Should Christians use the Qur’an in preaching the gospel to Muslims?

Notwithstanding these similarities, just how far should Christians (and Adventists in particular) be prepared to go in reaching Muslims? For over a hundred years, beginning with Samuel M. Zwemer (1867-1952, often affectionately called the “Apostle to the Muslims”), Christian missionaries to the Middle East have, perhaps controversially, used the Qur’an:

The writings of ancient missionaries say that Christians should not make any use of the Qur’an lest the Muslims think that the Christians accept the Qur’an as a divinely inspired book. I would rather follow what God, Christ, Paul and others have done in using what is common to the people with whom they were talking.[17]

The Qur’an itself doesn’t necessarily negate what seem to be cornerstone distinctions between Christianity and Islam, such as belief in the Bible, the Trinity, divinity of Jesus and the crucifixion. Thus, it is not the Qur’an that is often the biggest barrier to reaching Muslims with the gospel.

There are plenty of resources on this point, and it would probably require a separate article to explore further. However, a good starting point is to recognize the context of the Qur’an as 6th-century Arabia, which was dominated by pagans on the one hand and the Byzantium Empire on the other. Muhammed (PBUH) was not attacking Christianity as Adventists would understand it. In many cases, he was challenging Byzantium-Christianity that arguably had more in common with Plato than Paul. This is a perspective shared by Adventists who seek to call Christians out of Babylon.

A major issue with modern Islam is its reliance on oral traditions, admittedly contradictory, about the life and sayings of Muhammed (PBUH). These are called the Hadith.[18]  You’d be surprised how many supposedly “Islamic” beliefs and practices come from the Hadith, not the Qur’an: praying five times a day (the Qur’an only mentions three times); wearing beards or burkas (it only mentions men’s and women’s dressing modestly); or the idea that Abraham went to sacrifice Ishmael not Isaac. [19] Ironically, the Qur’an itself condemns these later supplements (Surah 6:38, 9:31).

Was Muhammad a divinely inspired prophet of God?

An even more controversial question is whether the Adventist Church could accept into fellowship someone who considered the Qur’an divinely inspired, and Muhammad (PBUH) a true prophet of God. While I still need to be convinced, Adventist leader Ralph Watts III (former President of the Hawaii Adventist Conference) suggested over fifty years ago:

Is Muhammad anti­christ? The answer is No… When we take time to study the sayings of Muhammad we discover that he preached a message—an important mes­sage by Seventh-day Adventist concepts—which was, “Repent, for the judgment of God is at hand.” He urged this message on the superstitious tribespeople in Arabia, in order to warn and arouse them to the fear of God. In this respect we surely are not amiss in accepting Muhammad as an in­strument, a reformer, in the hand of God to awaken the masses to accept a religion far better than they had previously followed.[20]

How big is the Adventist tent?

Now does this mean I personally believe in the prophetic gift of Muhammed (PBUH)? No – probably not. However, that isn’t the issue. The issue is whether I would be willing to recognize into fellowship those who do. How big is the Adventist tent? With potential religious tests for American immigration, this issue also has a practical application, akin to Jesus’ question about who is my neighbor. 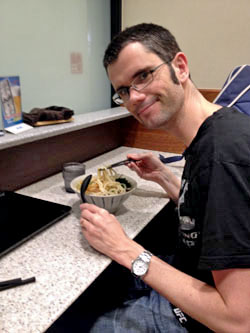 Stephen is a 37 year-old lawyer from Perth, Western Australia. He is married to Amy, and has a one infant child, William. Stephen was raised within the Adventist Church and remains a member in good standing at Livingston SDA Church. Stephen’s legal expertise is in planning, environment, immigration and administrative-government law. His education includes tertiary qualifications in history, political science, anthropology, law, military studies, management, theology and town planning.

There is some debate about whether the C-scale is distinct from the concept of “insider movement,” but for these purposes the general idea is the same.

[10] References to the Quran have generally been taken from the Sahih International translation into English:

[12] In the spirit of contextualization, I have adopted the common courtesy of using the acronym PBUH, standing for “peace be upon him” when citing Muhammad’s name. We hardly win people over by insulting their most respected religious leaders.

[19] Half a dozen or more Qur’an-only websites explore these issues in some detail, including: <https://en.wikipedia.org/wiki/Quranism>; <https://www.quranic.org/>; and <https://www.quranalone.co.uk/>, all retrieved 2 Feb 15.