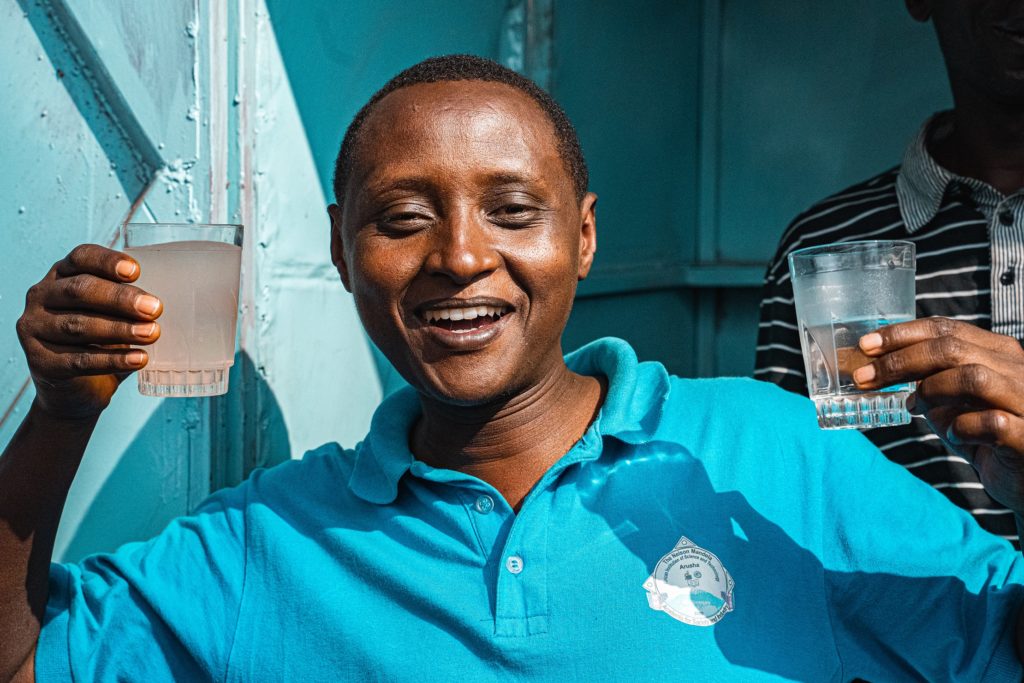 By Tyson Jacob, 10 January 2020   |   The government of Tanzania recently announced that Gongali Model, a corporation run by an Adventist couple, will train 400 young entrepreneurs in biogas technology to get the industry started in eastern Africa. Although they are in their early 40s, it is not the first time they have made significant strides in developing new technology in their part of the world.

Dr. Askwar Hilonga is the inventor of Nanofilter, a low-cost, customized system for providing clean drinking water in rural areas. His wife, Ruth Elineema Lukwaro, serves as CEO of the company and in October was one of five winners of the Presidential Prize for Africa Innovates.

Hilonga told Adventist Today that he grew up in Gongali, a poor, humble village near the Ngorongoro Crater. As in many rural areas in Africa, families in Gongali would drink river water. As a result, Hilonga has struggled with waterborne diseases throughout his life.

Motivated to alleviate such illnesses and improve life in his country, Hilonga pursued higher education, ultimately a Ph.D. in nanotechnology which enabled him to invent the Nanofilter. He entered the design in several scientific competitions, which rewarded him with enough prize money to fund his company and begin wide distribution of the Nanofileter.

Through his business, the scientist creates filtration systems customized to specific regions in Africa. By avoiding a universal, one-size-fits-all approach to filtering water, he is able to address the problem of heavy metals near Lake Victoria, as well as tackling the fluoride issue in the Rift Valley, for example.

The Nanofilter is important because it provides a low-cost, practical water purification system that increases access to safe water and prevents major health problems. According to the World Health Organization, 844 million people lack safe water and at least 2 billion people use a drinking water source contaminated with feces, resulting in 502,000 diarrhea deaths each year. It causes the death of one child every 20 seconds around the world. In Tanzania alone, 7,000 children die every year due waterborne diseases.

Nanofilter is unique because it “selectively” removes any water contaminant (bacteria, chemical-contaminants, turbidity, organic-matter) and produces 20 liters per hour of clean, safe water. It also removes chemicals like fluoride which cause teeth and bone fluorosis. The Nanofilter system is already installed in a growing number of houses and schools in rural Tanzania.

Hilonga was baptized in the Adventist faith at 12 years of age, and Adventist Today asked him if his scientific work had anything to do with his faith. “My project has a lot do with my faith in Jesus Christ,” Hilonga said. He mentioned the great responsibility that God gives to people who are blessed with ability and opportunity, referring to Luke 12:48, “To whom much is given, much will be required.”

In a presentation in front of Prince Andrew and a large audience in London, Hilonga expressed his gratitude to God for fulfilling the promise in Psalms 113:7-8, “He raises the poor from the dust and lifts the needy from the ash heap, to make them sit with princes.”

The Nanofilter has had significant impact throughout the country, including (to date), a quarter million people who have access to clean, safe water; 90 community water stations where people can buy safe water at affordable prices; 600 households with home Nanofilter water; and 73 schools with Nanofilter systems. The economic impact includes 105 employees, as well as 130 self-employed, local entrepreneurs who help install the systems.

As a result of what his company has accomplished, Hilonga has been given 12 awards and interviewed by the media on some 30 occasions. His videos on YouTube have had more than 2 million views.

Asked about his vision for the future of his company, Hilonga said, “I want to be a billionaire … not in terms of money, but in terms of impacting billions of lives.” Next on his to-do list, he told Adventist Today, is to create a filter that is easily transportable, convenient and esthetic. These updates will enable wider distribution of the product throughout sub-Saharan Africa and other regions. Already, he has had requests for the Nanofilter from Kenya, Zambia, Uganda, Rwanda, Ethiopia and India.

Reflecting on what he has accomplished and the positive impact it has had close to home, Hilonga has a message for the next generation of innovators. “I want to challenge young Africans to not look for jobs abroad,” he said. “If we can solve our problems in Africa, we will create employment opportunities and wealth here. We will have an impact, and we will start building our reputation as a country and a continent that can solve grassroots challenges. Many young Africans dream of going to Europe or America, but there is a lot of potential here at home. My experience demonstrates that if you go back home and serve your people, one day your community and the world will appreciate your efforts.”

Adventist leaders and church members have been quick to support Hilonga’s innovations. There are Adventists among his employees and beneficiaries, although he does not discriminate in hiring or picking projects.

Hilonga did his BSc.Ed in chemistry and biology and then a M.Sc. in chemistry at the University of Dar es Salaam. He completed the Ph.D in chemical engineering at Hanyang University in South Korea in 2010, and then also did an MPH at Sahmyook University, the Adventist institution in South Korea. He continues his academic work as a Senior Lecturer at the Nelson Mandela African Institution of Science and Technology (NM-AIST).

A TED Talk on why and how he started the company is available at:  https://www.youtube.com/watch?v=6BYPKRQHBOU

Hilonga is with Bill Gates and other inventors in this panel:  https://www.youtube.com/watch?v=zkjmJ5MyQoE

Tyson Jacob is a reporter for Adventist Today based in Tanzania. He can be contacted through the Adventist Today email address at atoday@atoday.org by putting his name in the subject line.