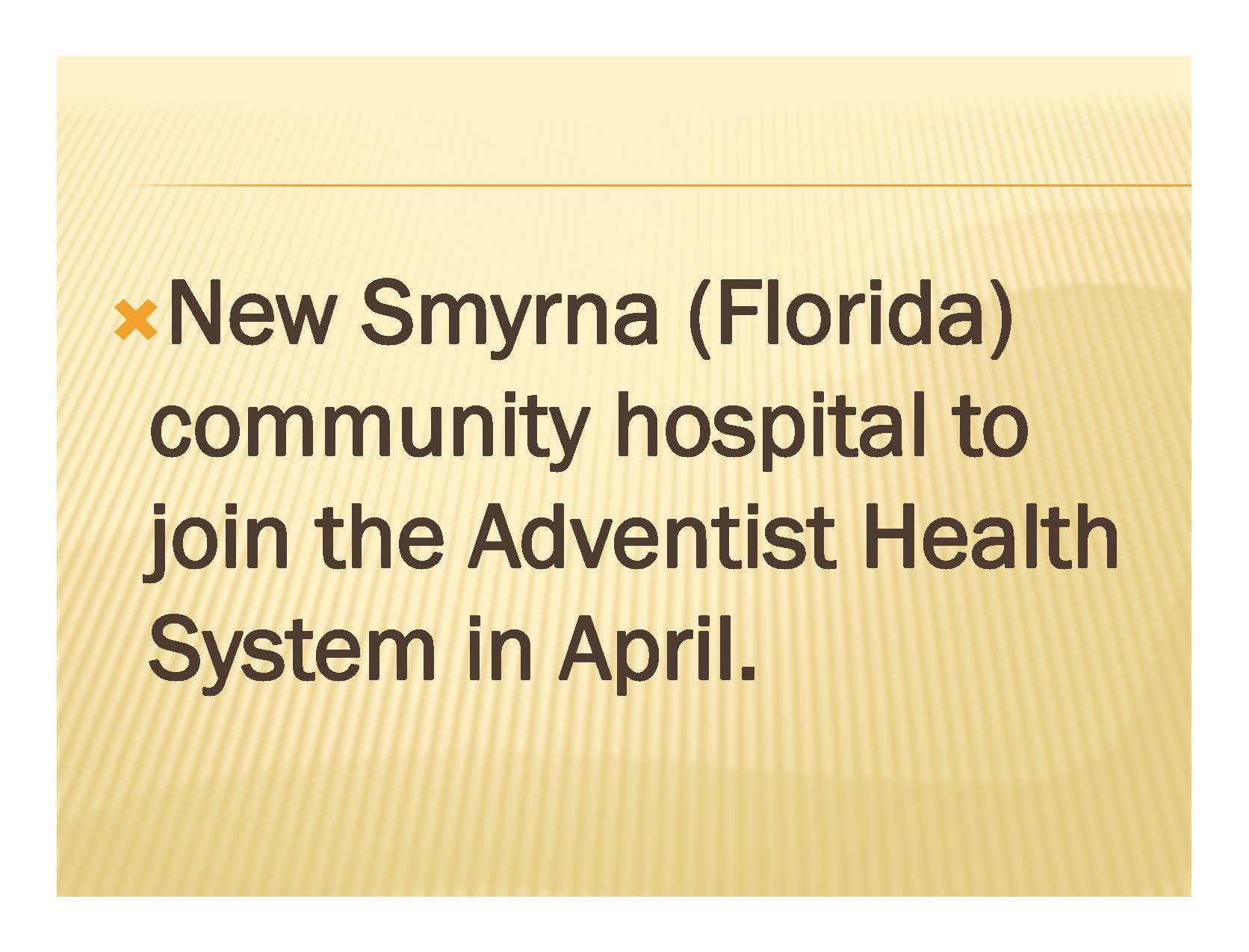 March 31, 2016:    Tomorrow (April 1) ownership of Bert Fish Medical Center, a community hospital in the Daytona Beach area of Florida, is set to transfer to Adventist Health System (AHS), the denomination’s largest health ministry. This merger has been on and off several times since 2010. The local government agency that owns the hospital voted last week (March 24) by five to one to go ahead with the deal after the Federal Trade Commission signed off on concerns about lack of competition, reported The Daytona Beach News-Journal.

AHS already operates five other hospitals in this area and several more in the larger central Florida region. It also sponsors the Adventist University of Health Sciences in Orlando, the largest city in the region.

Bert Fish Medical Center has been looking for a way to become part of a larger organization for several years. Throughout the United States hospitals find it increasingly difficult to operate as stand-alone institutions due to the costs involved in today’s high-tech health care and efforts by the Federal government to reduce deficits. Multi-hospital systems are believed to bring operating efficiencies and a larger base of resources for improvements and new technology purchases.

A 2010 deal with AHS fell apart when complaints were filed against the local government agency that owns Bert Fish Medical Center for negotiating the agreement in secret meetings in violation of a law that requires public sessions. Bert Fish then negotiated a deal with a commercial organization which merged soon thereafter with a larger corporation that vetoed the deal.

“Everybody … was excited about it” at the time of the original deal with AHS, the newspaper quoted Sue Williams, executive vice president of the local Chamber of Commerce. “I think that’s why we’re not hearing any negativity [this time]. I think it’s something that was the will of the community back then and it still is.”

The community hospital has been losing money for years. Its operating deficit reached $21 million in 2008, a difficult year for the American economy, and was $14.7 million last year, according to the newspaper. AHS had total revenues of $3.2 billion in the latest year on record (2013) and operates 44 hospitals across the U.S. south and Midwest, many of them community-based institutions.

There were details yet to be settled this week in the new deal between AHS and the Southeast Volusia County Hospital District, the local government entity that owns Bert Fish Medical Center. For one thing, the Florida attorney general has not yet signed-off on it, although the newspaper quoted a representative of the attorney general to the effect that with the Federal Trade Commission approval, the state would not block the merger.

AHS has agreed to pay the hospital district $40 million for a 25-year lease with an option to purchase the hospital, the newspaper reported. It also agreed to invest $35 million in maintenance needs and capital improvements over the next five years. The “district would contribute 90 percent of the taxes collected [in] the first year,” which was $15 million in 2015. “After that, the amount will decrease by 10 percent annually for seven years,” the newspaper said. It is unclear if this means ten percentage points per year, a reduction from 90 percent to 20 percent at the end of the seven years, or an actual 10 percent per year reduction from the first year’s total which would end up at about 43 percent of the starting amount at the end of the seven years.

Volusia County is on the Atlantic coast about 60 miles north of the Kennedy Space Center. It contains outer suburbs of the Orlando metropolitan region, a belt that runs more than 75 miles across the middle of the Florida peninsula with a population of more than three million. In the Orlando region are 76 Adventist congregations and 31,300 adherents, according to the 2010 United States Census of Religion. About a dozen of these congregations are in Volusia County with 2,300 of the total adherents.