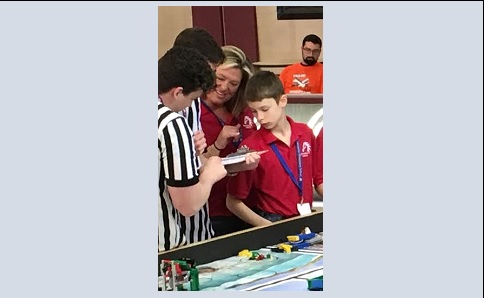 On April 10, 2016, 16 teams from around the Northwest and Saipan met at Walla Walla Valley Academy for the 10th annual First Lego® League Robotics Regional Tournament. This year’s theme was, “Trash Trek.” At the tournament, teams demonstrated proficiency in robot design, innovation in creating a new product that reduced trash, cooperation and teamwork in the core values, and efficiency in robot engineering and programming when they “ran the board” (set their robot to perform pre-programmed tasks to earn points). 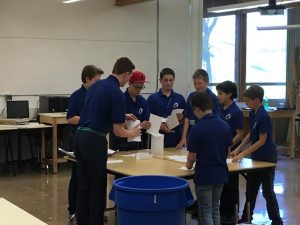 During the Core Values event, Team MGAES Robotics demonstrates teamwork by building a tower with paper. 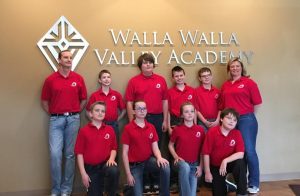 Malaika Childers, 5th and 6th grade teacher at MGAES, served as faculty sponsor for both teams, who worked together on the campus of Columbia Adventist Academy during the week and on weekends for months preparing for the event.

“When students have the opportunity to get involved in a program like this at the grade-school level, we (CAA) are excited to provide the space to nurture that interest. I’m very proud of what these students have accomplished and look forward to what the future holds for them,” says CAA principal, Jeff Jackson.

“I can’t begin to tell you the positive impact Lego® Robotics has had on our son, Nicholas.  It has improved his self-esteem and he has learned presentation and teamwork skills that will help him throughout his whole life!” says Marcé Palmer.

Nicole Scalf agrees her son has benefitted in similar ways saying, “Aidan is so motivated since the robotics competition. He wants to take the next level of math during the summer to get ahead in math and pursue engineering.”

With the intent of more focused instruction in Science Technology Engineering and Math (STEM) education, last year MGAES added the Lego® Robotics Club to the list of after school activities. This year, the elective Lego® Robotics class became an option for upper grade students as well.

Prior to the tournament, both MGAES teams met at Sweet Basil Pizzeria in Walla Walla, Washington for a special dinner with their families. Following dinner, many families went to an evening vespers service and tours of the Walla Walla University engineering department. Getting caught up in all the engineering excitement, Noah Schmalenberger, said, “I thought it was awesome because it was cool to see the room at the university where they design and program robots. Braden and I spent extra time there because we were having so much fun! We didn’t leave until 10pm!”

At the tournament, teams participated in four events: Core Values, Robot Design, Project Presentation, and Board Performance. In Core Values, teams were asked to explain what “Gracious Professionalism” means and then demonstrate teamwork when asked to complete a task together.

“Gracious Professionalism is competing not to destroy but to better ourselves. Like when our basketball team rescheduled a game because the other team couldn’t make it due to weather and would have had to forfeit,” said Maisyn Douglas. During the task, both teams had no trouble working together to demonstrate that they put the Core Values into action.

In Robot Design, teams had the opportunity to show off their robots to the judges and explain what made their robot unique. They also had the opportunity to explain why they chose to build their robot the way they did and to run the programs they were most proud of.  Team MGAES Robotics designed a very unique gearbox for their robot. During Robot Design, they were able to discuss the specifics of the gear box with the judges and explain their reasoning for using it. “We designed a gearbox that uses two motors that can output to five different attachments to allow versatility and efficiency in robot design,” said Ryan Mowrey.

The Project Presentation event gave teams a chance to present an innovative idea to the judges. Prior to the tournament, teams developed a new invention that would reduce trash and prepared a presentation for the judges to explain their invention and why it would reduce trash. “We developed the Horseshoe Trashcan Cleaner (or HTC for short). It is a lid that snaps on to a trashcan with a brush that moves to scrap dirt and gum off the inside. There is also a hose that attaches to a sink and sprays water into the trash can while it cleans. We hope it would be used in hotels, schools, and hospitals to replace the use of the plastic trash bags,” said Marideth Childers of Team MGAES Mustangs. 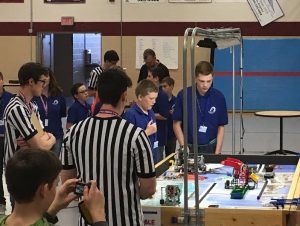 When teams entered the Board Performance portion of the tournament, they were met in the Walla Walla Valley Academy gym by an audience of family and friends from all over the tri-state area and Saipan. Here they were able to “run the board,” the highlight for most of them. During Board Performance, the robots were placed on an FLL mat with Lego® recycling centers, trash, trucks, and even animals that the robots had to maneuver into position or trigger. By programming their robots to perform particular tasks, teams earned points. During one run, a few spontaneous shrieks of joy emitted from Team MGAES Mustangs as their robot performed above expectation. At the end of the run, they looked at the scoreboard and realized they had beat their team best of 580 points by scoring 591 points.

Despite nerves, both teams enjoyed the opportunity to meet fellow robotic enthusiasts and show friends and family what they had been working for so long to accomplish. At the end of the tournament, friends and family gathered with the robotics teams in the WWVA auditorium for closing ceremonies. At the closing ceremony, Team MGAES Robotics learned that their team had earned 2nd in Project Presentation, 2nd in Robot Design, 1st in Core Values, and 3rd in Board Performance. Team Mustang Robotics found that they had earned 1st in Project Presentation, 1st in Robot Design, 3rd in Core Values, and 1st in Board Performance. Team MGAES Mustangs was also invited to attend the National Tournament in Sacramento, California on May 1 as the Northwest Regional FLL Robotics Champions.

Both teams returned home with more than just really cool robots, projects, and plaques that will be displayed in the halls of MGAES. They also came home with great memories. Ric Peinado, MGAES Principal said, “I am amazed by the commitment and dedication of both teams. I am particularly astounded with the MGAES Mustangs’ success at their first regional competition and invitation to the national championship in Sacramento, California. This opportunity to participate in robotics gives our children an engaging way to learn more about STEM education. I am so thankful for our parent volunteers (Peter and Heidi Schmalenberger and Michael and Stephanie Mowrey) and I also want to thank Mrs. Childers for her involvement with this after school activity. It was a great opportunity for our students to gain skills and improve their talents in STEM education, research projects, and presentations. It also gave our students the opportunity to show our community that science and fun can go together.”

After the regionals were over, Team MGAES Mustangs had two weeks to prepare for the First Lego® League National Competition. A total of 17 teams from across the nation who had placed in their regional tournaments met up with Team MGAES Mustangs in Sacramento, California on May 1 for the First Lego® League National Tournament. The opportunity to fly down to Sacramento and meet students from other schools who were as excited about STEM education as they are was thrilling for the entire team. They were able to participate in an event that showcased the robot design and performance they had worked on all year.

Braden Haberthur and Aidan Scalf at the board run.

Team MGAES Mustangs (in red) just before the tournament began.

Team MGAES Robotics (in blue) during a moment of silliness prior to the tournament.

During the Core Values event, Team MGAES Robotics demonstrates teamwork by building a tower with paper.

Team MGAES Mustangs (in red) pose together in Sacramento, California before the national tournament begins.