By Malaika Childers, 5th and 6th grade teacher, submitted to AToday May 13, 2015; originally printed in The Gleaner, reprinted by permission of the author. 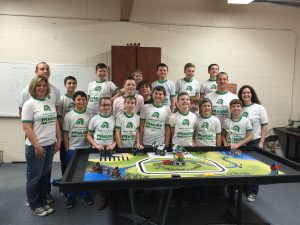 Lego® Robotics class members pose together during preparation for the showcase 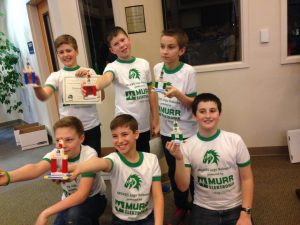 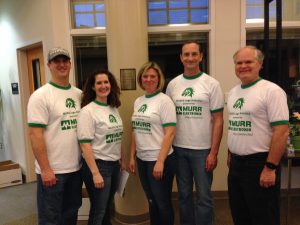 BATTLE GROUND, WA—This year, a few brave Meadow Glade Adventist Elementary School  parents took the reins of a program that would prove to be a phenomenal experience for those who participated. Michael and Stephanie Mowry, Peter and Heidi Schmalenbeger, and Jonathan Erich headed up the program which consisted of bi-weekly classes for several months where students learned to assemble and program robots. The program was sponsored, in part, by Murr Elektronic.

Preston Schafer, part of the team that placed first in the Lego® Robotics Showcase on March 12, said, “It was really fun learning about robotics. I also liked spending more time with my friends. At the showcase our robot performed the best it ever had!”

Each week the students attended one class after school and an elective class on Sunday. Working in pairs, students took turns programming and assembling the robots. Then, they would test their programmed robots on one of two boards. One board was dedicated to checking for accuracy in getting their robots to accomplish particular goals. A robot would be programmed to make a Lego® windmill turn and release an energy cell, activate a Lego® dam to release an energy cell, or perform other similar tasks. The other board was a test board where students would check a robot’s progress.

“We had so much fun watching the kids learn new skills this season. Many of the kids signed up because they liked to play with Legos®. They learned pretty fast this wasn’t just about building. There was design, engineering, programming, and strategy involved. Most importantly, it was about teamwork. I loved to watch a team finally accomplish a mission and see the other kids get excited and give high fives. I’m so thankful for the opportunity to be a part of this.” said instructor Heidi Schmalenberger.

Every year, Lego® provides a theme for participants. This year, MGAES used the theme, “Green City Challenge”. The idea was that robots would be programmed to turn a Lego® city “green” by releasing energy cells that were located inside different Lego® buildings. Once enough energy cells were collected, they would be inserted into a Lego® house that was then operating on a more efficient, “greener” level. Mission accomplished!

Columbia Adventist Academy generously allowed the class to use their robots and space on campus for the year. They had been purchased for a Lego® Robotics class at CAA a few years ago. Working together, principals Jeff Jackson of CAA and Ric Peinado of MGAES were hopeful that the program could begin at the elementary school level and continue to build into a program across the street at the high school level.

The culminating showcase event featured each team’s robots attempting to release energy cells and activate the “green” house. It took place in CAA’s Ad Building and was attended by CAA and MGAES faculty along with parents, grandparents, and friends of the participants.

Ric Peinado, MGAES Principal, said, “We, (MGAES and CAA) are thrilled with the club’s success and the opportunity to provide our children with an engaging way to learn about engineering. I am so thankful for the parent volunteers and want to also thank Murr Elektronics for their support of our school’s team and the hard work of everyone involved. It was a great night to not only showcase our kids’ skills and talents in STEM education, but also to show our students and community that science and fun can go together.”

Following the class, an anonymous donor provided funding so that the program can continue to the next level. The moneys will mean MGAES can purchase new robots, software, and form at least one, potentially two teams that will participate in the state Lego® Robotics Invitational in Walla Walla, Washington in April of 2016. The program that MGAES will be joining next year, the Adventist Robotics League, is comprised of schools across the NPUC. The ARL also includes instruction and demonstration in project management and presentation as well as robot building and programming.