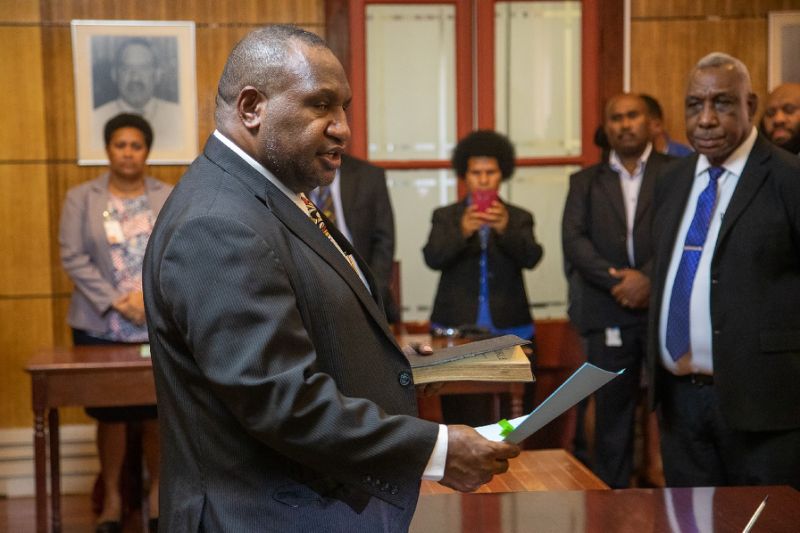 By Tysan, 31 May 2019 | The Hon. James Marape has been elected prime minister by the parliament of the Pacific island nation of Papua New Guinea (PNG). The vote was 101 to 8 to install the former finance minister, a Member of Parliament from Tari-Pori in New Hela province who is an Adventist.

The country has been through a tumultuous few months in its politics. Marape was a key member of the cabinet under the outgoing Prime Minister Peter O’Neill and in April joined the opposition in Parliament leading to O’Neill’s resignation. After O’Neill resigned on Wednesday, Marape and his supporters returned to the governing caucus.

The Guardian newspaper reported that “The vote came after months of turmoil in the Pacific nation, which has seen opposing MPs camped out at different hotels in the country’s capital of Port Moresby, high-level defections between opposing groups, shouting matches on the floor of parliament, and finally, the resignation of former prime minister Peter O’Neill on the floor of parliament on Wednesday.”

After his election on Wednesday, Marape said he would make fixing the economy, which he described as “bleeding and struggling,” his priority and sounded a warning to foreign companies working in PNG. “We will look to maximising gain from what God has given this country from our natural resources. This government is all about putting our country in the right place and taking back our economy. … We don’t need foreigners to come in to take advantage of our forestry,” he said.

O’Neill, who has led PNG since 2011, is only the second prime minister in the young country’s history to have served out a full term.

In a Facebook post after his election, Marape wrote that “It is a privilege to be the chief servant of this nation of a thousand tribes.” And he added, “I don’t promise I will be [the] answer to all of our nation’s problems, but I do promise I will give my very best effort to make a difference!”

Marape also gave credit to God for guiding his life. “Without God, I would not have come thus far from nothing, [so] the least I can do is do my best for God’s children in Papua New Guinea.”

The new prime minister is a local elder in the Korobosea Seventh-day Adventist Church. He attended Kabiufa Adventist Secondary School in the Eastern Highlands Province.

Pastor Glenn Townend, president of the denomination’s South Pacific Division, sent greetings to Marape on behalf of the church and promised to pray for him in his new, important role. “The South Pacific Division congratulates the Honorable James Marape on becoming the eighth Papua New Guinean prime minister,” Townend said. “We pray that he will continue to receive guidance from God as he leads this significant country. His Seventh-day Adventist values and heritage will hold him in good standing.”

The photo is of Prime Minister Marape speaking to members of the Papua New Guinea parliament. Tysan is a reporter for Adventist Today based in eastern Africa.