Adventist Doctor Who Serves in the U.S. Congress Seeks Aid for Veterans Exposed to Burn Pits 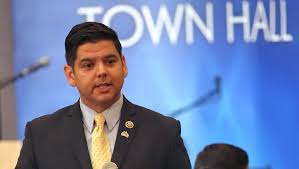 From News Release, 19 August 2019   |   Congressman Raul Ruiz, an emergency room physician who is an Adventist, introduced last Wednesday (13 August) the Jennifer Kepner HOPE Act to help American military veterans exposed to burn pits. The bill is named in honor of a wife and mother who recently died from pancreatic cancer linked to her exposure to toxic burn pits during her military service in Iraq and Afghanistan.

If it is voted by Congress, the legislation would make veterans exposed to burn pits eligible for low-cost health care from the Veterans Administration (VA). Kepner lived in the 36th Congressional District in California which Ruiz represents and is east and south of Loma Linda University.

During the conflicts in Iraq and Afghanistan, burn pits were used to dispose of waste, chemicals and trash, including batteries, jet fuel, and other hazardous materials, at or near American military bases. Many veterans are now suffering from rare cancers and pulmonary conditions linked to their exposure to these burn pits.

“Jennifer Kepner was a hero who courageously battled pancreatic cancer while fighting for her fellow veterans suffering from pulmonary conditions and rare cancers linked to burn pit exposure,” Ruiz said. “I am humbled to introduce the Jennifer Kepner HOPE Act in her memory, legislation that will ease the financial burden on sick veterans who have served and sacrificed for our nation by reducing their health care costs from the VA. We must not turn our back on this growing public health crisis. Jennifer’s empathy and courage continue to inspire me in this fight for our veterans to get the health care and benefits they have earned and deserve.”

“At the beginning of the fight, we were denied care and help from the VA. Not once, but twice. When you are going through that nightmare the last thing you want is letters from the VA saying, ‘There is nothing we can do,’” said Ben Kepner. “I thank Congressman Ruiz for the introduction of this bill in my wife’s name. It was one of her dreams to prevent other veterans from going through this. Time is short and we cannot deny care to these individuals who served this great country.”