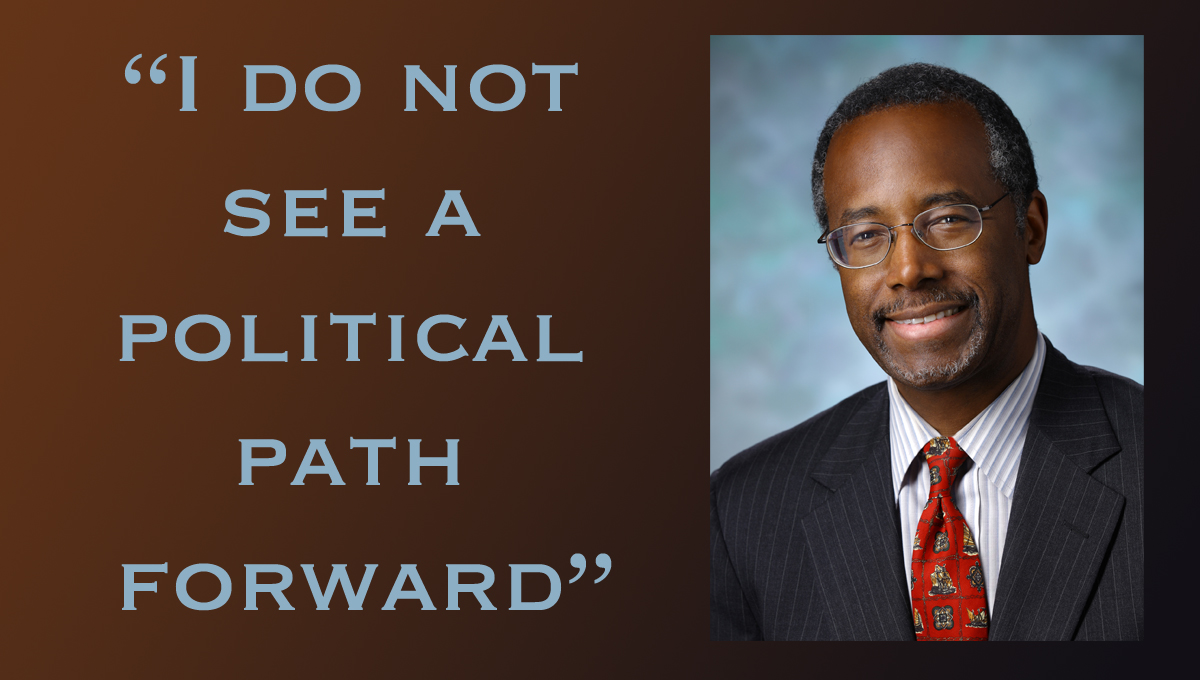 March 2, 2016:    Dr. Ben Carson, the Adventist physician who has been seeking the nomination of the Republican Party for president of the United States, told supporters today that he does not see a “path forward” and will not participate in the television debate scheduled tomorrow in Detroit.

Carson did not say that he was ending his campaign, but announced that he would make a speech about his political future on Friday at the Conservative Political Action Conference in the Maryland suburbs of Washington DC. “I do not see a political path forward in light of last evening’s Super Tuesday primary results,” the statement said. “However, this grassroots movement on behalf of ‘We the People’ will continue. Along with millions of patriots who have supported my campaign for President, I remain committed to Saving America for Future Generations.”

“The announcement served as an acknowledgment that Carson’s candidacy is all but over following a disappointing showing in the 11 states that held contests on Tuesday,” reported the Washington Post. Carson was briefly among the front runners in the Republican presidential race before his campaign began an extended public implosion.

“The decision follows months of candidate stumbles, staff infighting and strategy shifts derailing what had once appeared to be an unstoppable journey to conservative superstardom.” Carson became a political figure in 2013 when he was asked to speak at the non­partisan National Prayer Breakfast and took the opportunity to criticize the program introduced by President Barack Obama to extend health insurance to all Americans while Obama sat near him.

A few days later the Wall Street Journal published an editorial headlined “Ben Carson for President.” A campaign committee was organized and before he officially launched his campaign in May 2015, it had raised about $16 million and recruited 30,000 volunteers, according to its reports.

He had published a widely-distributed book about his rise out of inner city poverty to a high-profile neurosurgery career. At age 33 he was the youngest head of a service at Johns Hopkins University Medical Center and the first pediatric neurosurgeon to successfully separate twins conjoined at the head. The book also became a television movie.

Some Americans liked his bluntness and right-wing opinions about a flat tax and against “political correctness.” Others were angered by his comments that the Affordable Health Care Act was “worst thing that has happened in this nation since slavery” and that the United States now is “very much like Nazi Germany.”

It is likely that the same outsider status that made Carson appealing to many of the angry voters in the Republican Party led to the decline of his prospects. His support dropped in the weeks after the terrorist attacks in Paris and San Bernardino taking him down from being in the lead with Donald Trump to fourth or fifth place in most national polls.

As Carson fell from top-tier status, he blamed campaign aides for his drop in the polls and said there would be staff changes. Although he backed off from this announcement, a number of his most experienced campaign workers resigned a few days later.

The Carson campaign war chest, which had been flush with cash after solid fundraising quarters earlier in the race, began shrinking dramatically amid questions about how the money was being spent. Carson made changes last month, cutting staff salaries and shrinking his travel team.

The mild-mannered candidate lashed out at people he said were sabotaging his campaign, including Senator Ted Cruz, who later admitted that his campaign falsely circulated the idea that Carson was going to quit the race on the night of the Iowa caucuses. Carson had fourth-place showing in Iowa and then last place in New Hampshire and South Carolina. He again had poor results in the 11 Republican primary elections and caucuses yesterday.

Carson’s campaign did bring unprecedented attention to the Adventist denomination, including explanations of Adventist doctrines and discussions of whether the Adventist faith is truly in the conservative Protestant category. Although it now appears unlikely that Carson will be the first Adventist to hold the highest office in the United States government, he told reporters that he “will not disappear” and indicated that he still has opinions on public policy that he will share with the American people. What issues he will pursue, what his opinions will be and how they may affect the Adventist denomination remains to be seen.