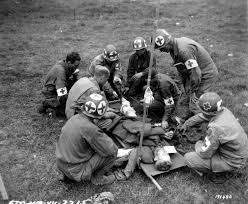 10 May 2018  |  A historic meeting for the revitalization of the Medical Cadet Corps (MCC) program took place from April 30 to May 2 in Levittown, Puerto Rico. The purpose of the meeting was to provide training for MCC officers who are currently involved in the program, and to initiate other leaders who are interested in reviving the MCC in their countries.

The MCC program was begun during World War II in the United States to make it easier for Adventist young men who were conscientious objectors to get into noncombatant assignments with the Army Medical Corps when they were drafted. It was developed around the training needs of the Army for field medics in collaboration with top military officers.

During the Vietnam War as more young Adventists in the United States became aware of the pacifist roots of their faith and the moral ambiguity of the denomination’s contemporary position, interest in the MCC lagged. When the U.S. ended the draft during Richard Nixon’s presidency, the program came to an end in that country. But, it continued in many other nations, especially in Latin America, where a draft continued and where it became a young adult volunteer program for public service in disasters and other emergencies.

“MCC cadets are trained and equipped to provide spiritual comfort, and other services such as first aid, relief, and humanitarian service during emergency situations,” said Chaplain Mario Ceballos, director of the World Service Organization for the General Conference, in a statement for the Adventist News Network (ANN). “The MCC training … equips cadets, ages 17 and older, to serve in their local communities in times of disaster. Their assistance … fosters goodwill with local residents and provides help in time of need. [And] we never know when world events could lead to a reinstatement of conscription, [so] it is best to prepare our young adults.”

During the training last week, the group heard presentations on MCC operations and organization, senior military leadership protocol and ethics with Dr. Washington Johnson, assistant director of WSO for the denomination’s North American Division. Rear Admiral Darold Bigger (U.S. Navy-Retired) discussed the qualities of executive leadership and flag officer etiquette. Pastor Dionisio Olivo, from the staff of the Atlantic Union Conference, shared lessons learned and challenges faced by the MCC program. Pastor Hiram Ruiz from the staff of the Inter-American Division, shared experiences of MCC groups in the Caribbean basin. Pastor David Sebastian, WSO director for the Puerto Rico Union Conference, described the work done by MCC units that responded to the devastation of Hurricane Maria and the positive coverage by the news media.

The pilot program of the MCC was launched in 1934 at Union College in Lincoln, Nebraska, by Dr. Everett Dick, a professor at the college and a World War I veteran. The training was the same that Army medics would receive–close order drill, Army organizational structure, physical training, military courtesy, camp hygiene, litter drill and first aid.

The Army soon recognized the value of draftees who had received this type of training and often placed them in positions of leadership in their unit. The vision of training young men for non-combatant service caught on and other Adventist colleges adopted the program.

At the 1939 fall meeting of the GC executive committee held in Lincoln the concept was discussed and committee members observed a demonstration drill by MCC cadets. As a result, it was voted to adopt the program and it was named the Medical Cadet Corps. In early 1950, training materials were updated and with the outbreak of the Korean War more than 3,000 Adventist youth in the U.S. took the training during the 1950-1951 academic year.

What began as localized training in the U.S. grew to be a method for Adventists to serve as noncombatants in many countries. MCC cadets trained and served in Brazil, Cuba, Puerto Rico, Mexico, the Dominican Republic, the Philippines, Korea and China.

Many MCC graduates served their nations in times of war and peace. They were able to bring aid and comfort as a part of their service. The legacy of the MCC has become a part of the Adventist heritage that demonstrates a calling to serve both God and humanity with compassion, even at the risk of life.