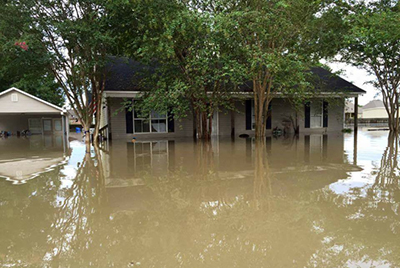 From ANN, March 30, 2016:Adventist Community Services Disaster Response (ACS DR) sprang to action after disasters hit Baton Rouge, Louisiana and Clayton, California last week. Volunteer teams comprised of church members and ministry leaders are working together in response to historic flooding in Baton Rouge that has displaced more than 200,000 residents, and a massive fire that has destroyed 175 homes and building in Clayton.

The American Red Cross has called the flood in Louisiana the nation’s worst natural disaster since Hurricane Sandy, which struck four years ago and resulted in the deaths of 147 people in the Northeast United States, Canada and the Caribbean.

From August 8-14, nearly 6.9 trillion gallons of rain fell throughout the state of Louisiana.

By August 15, more than 10,000 people fled to shelters. The following day, more than 40,800 people registered with the Federal Emergency Management Agency (FEMA). Reports indicate that 40,000 homes have been damaged, and at least 200,000 people have taken up temporary residence in shelters, hotels, or relatives’ homes. Several residents are still missing, and at least 11 people have died as a result of the flooding.

Some parishes received more than 20 inches of rain during the weekend and are still inundated with rising water levels. ACS DR reports that these areas are inaccessible because of road closures. “We are attempting to get food and supplies to those affected via boats,” says the report. Clothing, food, diapers, personal hygiene supplies, and bed linens top the list of donated and needed items.
The Baton Rouge Seventh-day Adventist Church, along with the Kenner and Metairie Adventist churches in New Orleans, are currently offering shelter for evacuees. Several churches in Arkansas and Northern Louisiana are operating collection centers to gather much needed emergency items that will be distributed to those affected.

Lavida Whitson, Arkansas-Louisiana Conference ACS DR team leader, shared that while Adventist volunteers have stepped in to help, “some members from other churches in the area, as well as two Adventist pastors, have had their homes heavily affected.” The Baton Rouge Spanish Seventh-day Adventist Church has reported that 90 percent of their members were evacuated from their homes and they are sheltering 35 flood victims.

The Arkansas-Louisiana ACS DR team is involved in recovery efforts. They have lent cots and mattresses to the Kenner church, which is sheltering 25 displaced residents. They are also in contact with the local food bank, making arrangements to feed the evacuees.

Whitson reports that three non-government organizations have also asked ACS to set up warehouses in their communities. Says Whitson, “We await the state’s final request before we respond in the affirmative to any of these entities.”

According to Sherry Watts, assistant director of ACS for the Texas Conference, ACS DR has been asked by Louisiana to open a multi-agency warehouse in Baton Rouge to accept donated goods for flood survivors, which is scheduled to open by week’s end.

The Texas Conference DR team, led by Joe and Sherry Watts, along with Durandel Ford, Southwest Regional Conference ACS director, are connecting with those on the ground, offering support to ACS DR efforts taking place across the state.

NAD ACS is working with Irene Williams of the Southwest Regional Conference, who is issuing “comfort kits.” Williams also connected their team with the National Association of Katrina Evacuees, a group ACS worked with 10 years ago during and after Hurricane Katrina.

The Greater New Orleans church, along with other Adventist churches in the area, are donating requested clothing, toiletries, and water to the Orleans Parish Sheriff’s Office. Much of these items are being brought to the Westbank Seventh-day Adventist Church for later distribution at the Berean Seventh-day Adventist Church. Says Williams, “As we help during this disaster we ask others to pray with us—keep Louisiana in your thoughts and prayers!”

The Clayton fire in Lake County, California, which has been reported as arson, started on August 13. By August 17, the 40-percent contained fire had burned 4,000 acres and destroyed 175 homes and businesses, ravaging small-town Lower Lake’s Main Street commercial district.

Lakeport Seventh-day Adventist Church is one of three locations listed on the California government website as an evacuation center. Reports indicate that at least 15 evacuees have sheltered there.

Both Lakeport and Middleton church leaders and members are providing support for evacuees, which include a few Adventists who lost their homes and businesses. Red Cross Volunteers are utilizing the Middletown Adventist church while a group of Adventist volunteers is assisting at Twin Pines Casino, a second evacuation center. Last year the Valley Fire caused destruction in Middletown — some who received help then are lending assistance and prayers during the Clayton fire recovery.

Shirley Burns, after receiving a news update from the Clearlake Seventh-day Adventist Church, remarked that it was, “so sad that it is happening again. We have a rental in Lower Lake that my step-daughter lives in that was damaged — she was evacuated. We will continue to pray for your wonderful church family.” Burns is the daughter-in-law of Bruce Burns, who died in the Valley Fire.

As ACS DR volunteers assist the fire damaged community, Jim Pedersen, president of the church in Northern California, expressed appreciation for their efforts, saying, “Prayers are going up on everyone’s behalf!”

The Role of ACS DR

Lea says, “We know disasters will increase in severity and number as we approach Christ return. In both these most recent cases, volunteers and ACS personnel have put all of their daily routine activities on hold to assist the community. These types of responses are commonplace for many who are helping their communities with no thought to asking for anything in return.”

Lea recalls a conversation he had with Calvin Watkins, president of the Southwest Region Conference, about the activity taking place and the needs of the community after these disasters. Watkins said, “We have relationships with our community — we know when they’re hurting and need us.”