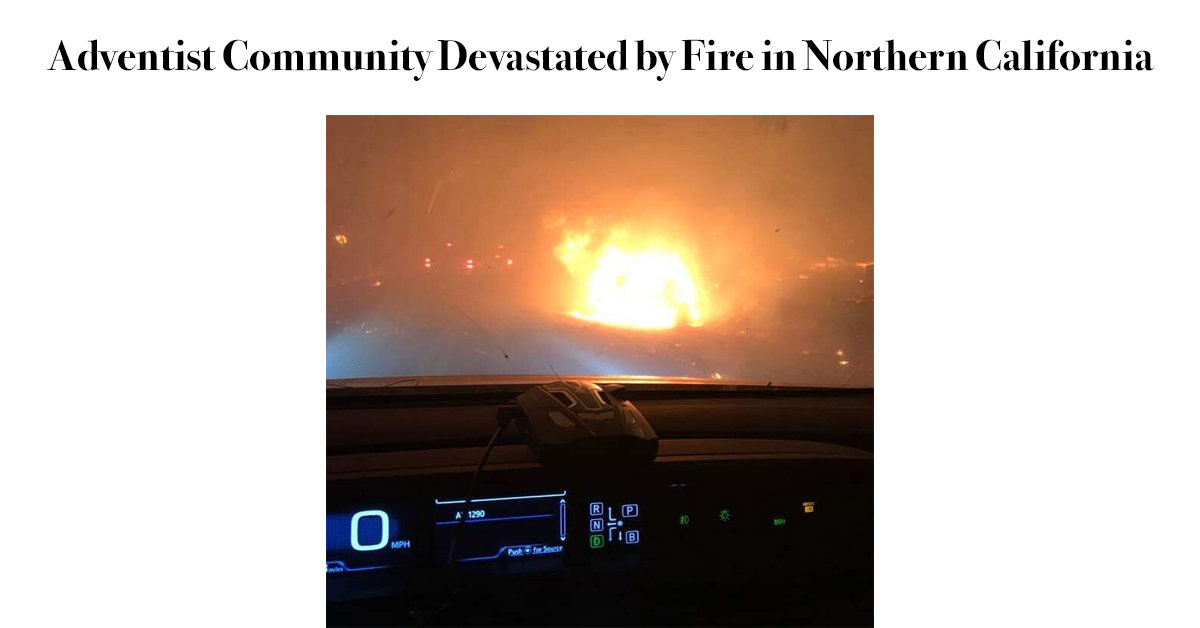 13 November 2018 | “We were surrounded by fire as we came to a stop; it became very, very bleak,” said Courtney Rasmussen, Communication Manager at Adventist Health Feather River (AHFR), the hospital in Paradise, Calif. He spoke to Adventist Today about his narrow escape from what has become known as the Camp Fire, a fire that continues to devastate Butte County in Northern California.

Rasmussen said that he was in a caravan of cars that included staff evacuating patients from the hospital in their personal vehicles when they got stuck in gridlocked traffic as residents rushed to leave the town. Surrounded by fire, Rasmussen said that he and the others in his vehicle called loved ones to say their goodbyes.

“We were just praying for deliverance and mercy for everyone involved,” said Rasmussen. “I just kept praying and praying out loud as we inched along.”

As of this date, the death toll from the Camp Fire that has ravaged Paradise and surrounding areas has reached 48. At least 8,800 structures have burned down. The town located in the foothills of the Sierra Nevadas is home to an Adventist school and church, in addition to the hospital.

Adventist Health Feather River’s medical center sustained some damage to its lower level, but the core of the building that is home to services such as its cancer center, birthing center, emergency department, critical care unit and more survive. Upon initial assessments they look to be in very good condition.

Paradise Adventist Church, a large church with several hundred members in weekly attendance, was burned to the ground. According to the Northern California Conference of the Adventist denomination, the K-4 section of Paradise Adventist Academy was destroyed but the rest of the school is still standing.

Rasmussen said that he arrived for work at Adventist Health Feather River when the fire reached the hospital on the morning of Nov. 8. He said the hospital quickly started to follow emergency procedures. Hospital staff train frequently on how to respond to disasters including wildfire, partly because the hospital had to evacuate once before due to the Butte Lightning Complex fire that threatened to enter Paradise and the campus in 2008. Both fires approached Paradise from the same direction.

AHFR leadership made the decision to evacuate the hospital as soon as they realized how fast the flames were moving. As there was not enough time to wait for ambulances and emergency vehicles to arrive, many patients were loaded into hospital employee vehicles for the evacuation.

“Our goal was to do whatever it took to quickly yet safely get our patients out of danger,” said Rasmussen. “It was really incredible, our hospital family acted so selflessly. They really lived out the Adventist Health mission.”

Because the fire moved so rapidly, some cars returned to the campus where staff continued to care for and protect the patients until they could be evacuated by emergency personnel. All patients and employees at the medical center that day have been accounted for.

Emergency services were able to ease the gridlock on the road that Rasmussen and his caravan of cars were using to escape. He got to a point of safety and then everyone on the road was moved to a parking lot at the local Kmart that firefighters were protecting. After many hours of sheltering in place, with the town catching fire around them, the group was led through the burning town to safety by emergency vehicles.

Rasmussen, whose house was destroyed by the fire, said that the vast majority of approximately 600 employees that attended a post-evacuation hospital town hall meeting had lost their homes as well.

It is unknown how many church members’ houses were destroyed by the fire. So far, no member deaths have been reported.

Volunteers and donations of clothes and other items are not required at this time. Instead, money and gift cards are needed. Gift cards to stores like Target and Walmart can be mailed to Chico Seventh-day Adventist Church, 1877 Hooker Oak Ave, Chico, CA 95926-1738

To donate online, visit www.nccsda.com. Those wanting to help can also text NCCSDA to 77977 to give or mark “NCC Disaster Relief” on Adventist tithe envelopes. Readers are invited to contact Ed Fargusson (Ed.Fargusson@nccsda.com) if they know of families needing help.

Car fire as seen through the windshield of one of the vehicles evacuating Paradise. Photo credit Hugh Gilbert.