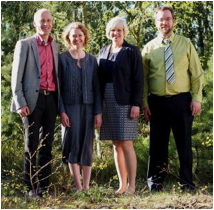 From APD, May 8, 2016:    Yesterday the Adventist denomination’s Danish Union Conference had a service at its annual camp meeting setting aside four young pastors with prayer and laying on of hands. It was not an ordination service, although it looked like one to some observers. The four pastors were “appointed,” announced Pastor Thomas Muller, the union conference president. Two were men and two were women.

“Appointment” is term not used in denominational policies or minutes. It is different from either “ordination” or “commissioning,” both of which are defined in the GC Working Policy. The union conference has appealed to the GC’s Trans-European Division for a new credential for “appointment” under GC Working Policy E 05 05 which allows for other credentials to be issued as culturally appropriate.

The four pastors were Michael Bidstrup, Anne-May Muller, Rebecca Pedersen and Thomas Rasmussen. “The appointment is made by the Lord,” stated the union conference president. “Today we are setting apart and recognizing their gifts and their calling to pastoral ministry.”

“To recognize the spiritual gifts of a person [and] to pray with her and … lay hands, in our opinion, is a way to a more Biblical understanding of the status and role of pastors in our church,” Thomas Müller, said during the ceremony. “The Adventist Church in Denmark is seeking unity with the worldwide [Adventist] Church.”

The Danish Conference was the first self-supporting conference established by the Adventist denomination outside of the United States in 1878. There are more than 2,500 members in 45 congregations in the nation of 5.7 million residents.