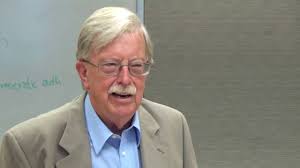 September 6, 2017:      Dr. Charles Teel, professor of religion and society in the H. M. S. Richards Divinity School at La Sierra University, died Friday (September 1) due to complications from West Nile Virus. He was a faculty member for 50 years and the founder and director of the Ana and Fernando Stahl Center on the campus in Riverside, California. He was 78.

Teel was raised in Loma Linda where his father, Pastor Charles Teel, Sr., was a well-known and much-loved Adventist clergyman. He received his Bachelor’s degree in religion from Pacific Union College. He earned a Master of Arts from the Andrews University seminary, a Master of Theology degree from Harvard University, and a PhD from Boston University. His dissertation focused on the pastors who went to jail with Martin Luther King in the civil rights movement during the 1960’s.

His pastoral and teaching experiences prior to joining the faculty at what was the La Sierra Campus of Loma Linda University in 1967 included Newbury Park Academy in California and the Boston Temple Adventist Church in Massachusetts. His wife, Marta, was for many years a language teacher in the Colton Unified School District near the La Sierra campus. They have two daughters, Alma and Melanie, both of whom were born in Honduras.

Fernando and Ana Stahl were pioneer Adventist missionaries in Latin America and the focus of ongoing research by Teel because they provided a good example of how a generation of Adventist missions not only recruited church members but also had a positive and lasting impact on society. The couple were trained as nurses and “medical missionary workers” at Battle Creek Sanitarium and went to Peru in 1909. In the Andes highlands they found a near-feudal situation where a small alliance of landowners, government officials and Catholic priests kept the 90 percent of the population who were indigenous to the area from even the most basic education and economic opportunities.

The Stahls started churches, established medical clinics and organized markets to spread the Adventist message and empower the people and help them out of poverty. They developed more than 200 schools enrolling tens of thousands of students. Within a single generation the impoverished and oppressed indigenous communities around Lake Titicaca were able to elect a graduate of the Adventist schools to represent them in Peru’s national legislature.

This case study of Adventist mission work that has gone largely unreported in official denominational materials is the central focus of the Stahl Center that Teel started. It also has a collection of artifacts and manuscripts from about 135 other Adventist missionaries from the same early 20th century period.

Teel was also much appreciated for his ability in creating liturgy. Perhaps most noteworthy is his “The Apocalypse as Liturgy,” a complete worship service using just texts from the Book of Revelation. He also designed the liturgy celebrated on December 2, 1995, when the La Sierra University Church ordained Dr. Madelynn Haldeman, a Biblical languages professor at the university, and Pastor Halcyon Wilson, an associate pastor at the church, among the first wave of women clergy ordained among Adventists. “The tone of the service was spiritual and joyous,” observed Chaplain Steve Daily at the time.

Teel was noted for taking students and others on a tour each summer to Peru and other locations in Latin America. It was one of his many attempts throughout his career to demonstrate that Adventist faith could be truly transformative of the surrounding culture. He taught courses in Christian ethics with the goal equipping those who led in institutional life and participated in the politics of civic life.

“In the classroom, he was passionate, creative, alert, enthusiastic,” remembers Gary Chartier, a colleague on the La Sierra faculty in the School of Business. He also “modeled reflective, serious intellectual activity” and won a National Endowment for the Humanities Fellowship. Chartier’s tribute to Teel includes personal stories about how Teel ministered to him as a pastor, praying with him on occasion. It is one of many memorial statements published by Spectrum, the journal of the largest association of Adventist academics, earlier this week.

Teel was the editor of a volume entitled Remnant and Republic: Adventist Themes for Personal and Social Ethics, published by the Center for Christian Bioethics at Loma Linda University in 1995. It can still be purchased among the used books on Amazon.com.

A memorial service will be held on Sabbath afternoon, October 28 (4 pm local time) at the La Sierra University Church. It will be live-streamed at www.lsuchurch.org.