A Slaughtered Lamb in Heaven: Inauguration or Day of Atonement? 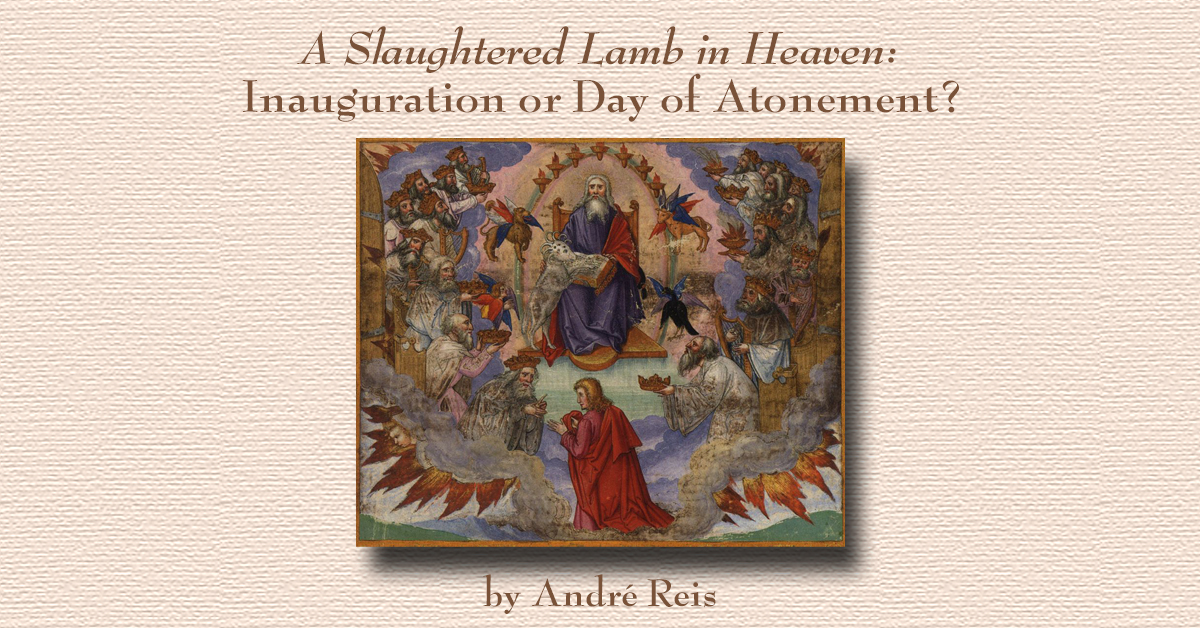 Adventist scholars have long debated whether the Old Testament background for Rev 4–5 is the inauguration of the earthly sanctuary or the Day of Atonement. The implications of this are not unimportant for Adventist historicists who see Jesus initiating his Day of Atonement ministry in 1844 rather than at his ascension.[1]

This brief study will briefly explore the arguments for both positions.

Day of Atonement in Revelation 1

It appears, then, that John is setting up his description of the exalted Jesus not only as a regular priest inside the sanctuary, but a high priest officiating on the Day of Atonement. Jesus ministers and intercedes as high priest for the seven churches of Asia represented by the seven lampstands.

Not surprisingly, the vision of the slaughtered Lamb inside the throne room––the heavenly Most Holy Place––appears to be a segue from Rev 1 and contains echoes of the Day of Atonement. First, let’s do a quick overview of Rev 4–5.

After the letters to the seven churches, the exalted Jesus invites John to “come up” into heaven (Rev 4:2). John finds himself immediately “in the spirit” in the heavenly throne room. He sees a throne surrounded by a rainbow with someone who looks like “jasper and carnelian” seated on it (4:2–3) and, around the throne, twenty-four thrones with “twenty-four elders, dressed in white robes with golden crowns on their heads (4:4). Dramatic atmospheric phenomena (4:5) fill the room where also are present the seven spirits of God symbolized by “seven lamps” (4:6). Around these twenty-four thrones there are four “living creatures” (4:7) which defy description. They praise God without ceasing (4:8) while the twenty-four elders follow with acclamations and cast their crowns before the throne (4:10–11).[2]

The scene is continued into Rev 5 where the sealed scroll which is in the hand of the God comes into focus (5:1). A mighty angel asks with a “loud voice,” “Who is worthy to open the scroll and break its seals?” (5:2). When no one is able to take the scroll John weeps bitterly but is told by one of the twenty-four elders that the “Lion of the tribe of Judah, the Root of David” is worthy to take the scrolls and open its seals (5:5). The focus of the scene then turns to the throne and to the Lamb standing who takes the scroll (5:7), an event that elicits the praise of the four creatures, the twenty-four elders and all the angelic hosts (5:8–14)

Several elements in these chapters reveal echoes of the Day of Atonement in Rev 4–5.

On balance, the imagery accompanying the “throne room” scene and the “slaughtered lamb” seen inside the heavenly Most Holy Place in Rev 4–5 does not echo any OT tabernacle/temple inauguration passage but conflates Old Testament atonement themes: (1) the Passover lamb (Exod 12:21; cf. 1 Cor 5:7; John 1:29, 36); (2) the offering of sacrificial blood inside the Most Holy Place on the Day of Atonement (Lev 16) and; (3) the suffering servant/slaughtered lamb of Isa 53:7, 10 offered as a “guilt offering.”

The natural conclusion is that these chapters describe the atoning sacrifice of Jesus and his subsequent ascension to the heavenly sanctuary where he entered “within the veil” of the Most Holy Place, “once and for all… with his own blood,” to “intercede forever” (Heb 6:19; 9:12; 7:25), events which lay in John’s past. As such, this initial scene stands as a foundational Leitmotif for the presentation of Jesus in the remaining chapters of Revelation.

André Reis, PhD., has degrees in Theology and Music and has recently finished his doctorate in New Testament at Avondale College. He writes from Orlando, FL where he lives with his wife and three daughters. He is the author of the upcoming book The Day of Atonement in Revelation.