A Picture and a Thousand Words, Part 1: Bethany Chapman 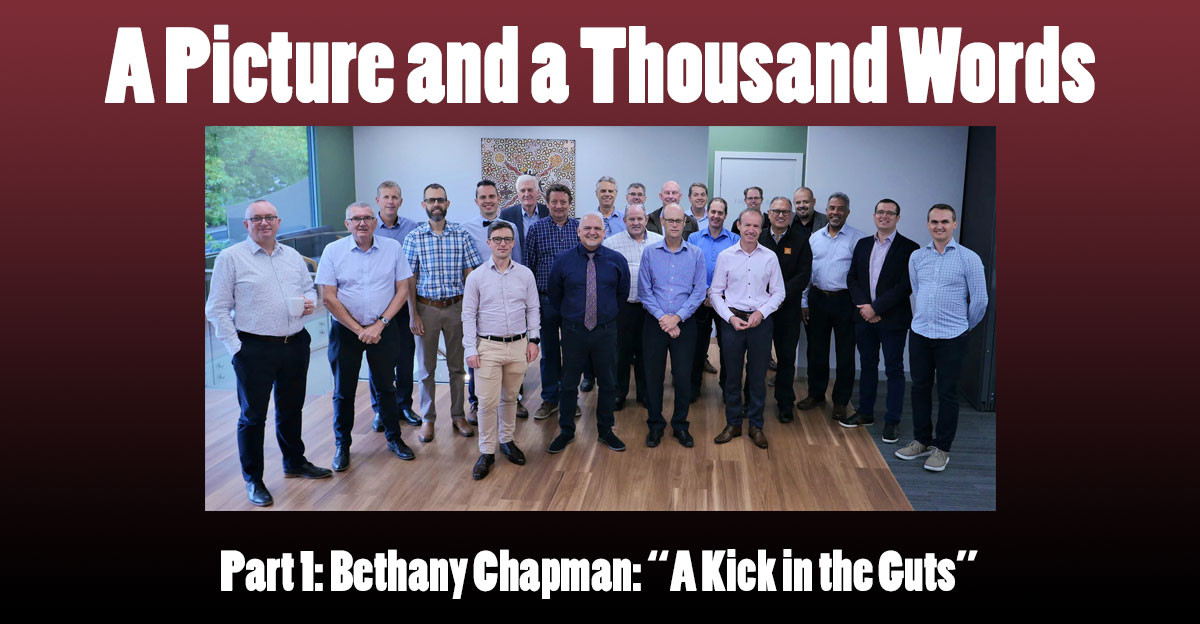 On March 15, the Seventh-day Adventist Church in Australia posted the above picture on its Facebook page with this caption:

We are so happy to welcome back administrators, from all nine conferences, to our office this week, with only a few joining via zoom. They are here for several meetings including: President’s Council, Administrators Council, Secretaries and CFO’s Council, Executive Committee and Board of Directors.

The picture, posted during Women’s History Month, immediately got strong reactions from Adventist women, some of which we’ll feature here. The first is from Pastor Bethany Chapman, who is the Women’s Ministry Director of the Northern New South Wales Conference.

I am a female pastor. This is my 14th year in ministry. This church is what I think about, dream about and sacrifice for. That’s what pastors do, because God has asked us to, because we have been gifted by the Spirit, and because the Gospel of Jesus Christ compels us to.

When you’re a female pastor, the deep patriarchal structures of the church are a constant, normal and yet unpleasant part of the everyday life you lead. You live in a double bind: your very existence in the places you go is an act of resistance; and yet the unwelcoming aspects are somehow normal and expected.

I’m not saying that it’s right. I don’t think it’s right. But it certainly is the current reality. When you live that reality, you know that sometimes you will be the only woman on a committee. You know that when you decline the invitation because of other commitments it is likely there will be no other woman. You are used to there being no other woman—unless there is another rare one, perhaps far away.

When the Australian Union Conference Facebook posted this image of their administrators advisory meeting, it broke my heart. I can see why some people had a visceral reaction to a room full of 23 men who were predominately white and over 40. I shared the image on my personal page with commentary about my passion for female pastors.

I genuinely believe that as long as female ordination to ministry is still an issue, women will not be included in these spaces. According to current policy 2/3 of the positions could be filled by women—but there are ten of those jobs that can never be done by women as long as women are excluded from male-only ordination to pastoral ministry. This makes women second-class pastors, and as long as they are seen as second-class pastors, they will also be seen as second-class leaders and second-class church members. So men are left as the ideal candidates for leadership, and women are overlooked; or worse, women don’t even see church leadership as a place where they can aspire to use their God-given gifts.

I have three daughters. Our daughters believe they can be anything when they grow up. They can use their gifts to serve as CEOs, managers, school principals, parliament members and academics. But they are forbidden from being fully included in certain areas of the church they love.

As a female pastor, I notice that ministers’ meetings have no queues for the female toilets, and often you get a room on your own instead of bunking in a cabin with all of your snoring colleagues. I am familiar with being called “guys” or “the men” and having to translate it to include me. I know that when they say “pastors’ wives” they also mean my husband—and yet he is really not included. I know all of these things deeply and painfully. I know it so much so that I am accustomed to it, or I would not be able to persevere in my calling, and I would become too discouraged to do my work.

I understand this group’s relief to finally meet in person and not on Zoom. It’s exciting, and I can understand how an excited person could want to put a picture of a real-life event, after so much has been cancelled and shifted to online for two years. Yet the picture felt like a kick in the guts. It was the first time I was visually confronted with just how unrepresented I am. And not just me personally but all the hardworking, God-fearing, dedicated and Spirit-filled women I am honored to know and love: the female church elders who lead local churches with passion, vision and dedication; the female deacons who show up practically for the needy, make a hot meal for the sick, and create beautiful spaces for worship; the female teachers, nurses, worship leaders, sabbath school teachers, chaplains; and even my very own daughters. The church is 60% female and yet our leadership is majority male, and in some spaces not even one woman is present. (I am told one woman was attending the meetings via Zoom.)

The sad thing is that apparently nobody in the room thought that there might be a problem with the picture—not one person out of 23. I personally know 14 of the men in that room. One of them was a teen at a church when I was the youth pastor, one of them sang in the church choir with me when I was a new convert, one of them was my internship supervisor, one of them is my husband’s best friend, three of them have offices down the hall from mine, others have been colleagues of mine and risked their necks to support, hire and advocate for female pastors.

I know that all of these men are elected by a nominating committee and voted by a larger body. Unlike the business world, they often don’t need to send in a CV, apply for, or interview for these positions. And that may be one of the problems. We need strong men who will not simply excuse this on the grounds of traditional denominational processes, but who will go the extra mile to be sure that the church makes sure women are included because they realize that the church needs women leaders.

My sincere hope is that the reaction to this image has made the men I know push harder for change. I also hope it has encouraged the ones who did not see an issue with this picture to think again. May these men use their position for good. May they speak with boldness and realize that their voices matter to the church of today, the past and the future.

Most of all, if you do support women’s ordination and the full inclusion of the whole church in all areas of gospel ministry, then your action is needed. Your voice matters.