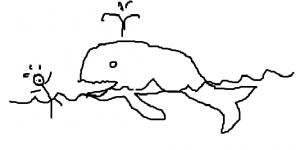 I ply the waters of earth, the seas, the oceans.  My ancestors have been here for as long as our planet has.  I can grow to almost 70 feet long and live almost 70 years.  I eat a variety of things, but my favorite is squid.   On a single breath (which I can hold up to 90 minutes), I will dive well over a mile deep, and sometimes do battle with the giant squid, whose length, including body and tentacles, may exceed my own.  Their suckers, which exert tremendous negative pressure, sometimes attach themselves to my massive body as we duel, and leave later scars.

My much smaller cousin, the dolphin, is thought to be highly intelligent, and, indeed it is.  Their brains, and mine, are larger than a human’s.  It is also playful, good natured, and kind.  More than one human has been rescued from the water by dolphins.

But I, too, am intelligent.  Because I have my own language and method of communicating, you may not realize it.

One of my ancestors, a very long time ago, recalled a time when it rained—heavier than it ever had, not only downward but upward—for 40 days.  Water covered the earth.  The seas rose.

We who lived in the sea managed to survive, although my ancestor admits to having been frightened.  He remembers a large boat, perhaps a ship (he had never seen anything quite like it, it was so big) floating in the water.  He didn’t know what to make of the 450-foot long craft.

Eventually the rains stopped, the waters receded, and the boat disappeared.

Stories as remarkable as that got passed down from generation to generation.  My father told it to me one day when I was but a calf.  Someday I will tell it to my offspring.  A tale like that should not be forgotten.

You may not believe what I’m about to tell you, but it’s true.

One day I was swimming in the Atlantic Ocean, when I was instructed by my Maker to go to the Mediterranean.  Sperm whales don’t normally inhabit that sea, but I felt strangely moved (I will not try to explain, because I’m unsure I understand it myself), so I went.  Through the Straits of Gibraltar I swam, undetected.

The waters were rough, blown by a strong wind.  Swimming was difficult.  I was not happy.

I saw, dimly (even though I can retract my eyes, I don’t have particularly good eyesight) a man enter the water.  From the way he entered, I think it was not a dive; he was either pushed, thrown in, or fell.

A remarkable thing happened when he broke the water’s surface:  the sea became calm.  I was happier.

I was told to swallow him, but not bite or chew.

That was not too difficult for me, as I often, particularly when in a hurry, swallow my food whole.  My stomach acid is usually sufficient to digest whatever I’ve eaten.

I wasn’t given any further instructions – at least then.  I found the Mediterranean to my liking, other than the waters being warmer than what I was accustomed to.  And there weren’t any other whales there.  I was able to find enough food (I eat about a ton of fish and squid a day) and stayed below the water’s surface so I wouldn’t be spotted.

It went on that way for 3 days.  I ate and swam as I normally do.  I could tell that the man I’d swallowed was still alive, because, every so often, he moved around a bit.  My insides felt strange.  This was a new experience for me, as I suspected it might be for him.

On the third day, I got another directive:  throw him up on land.  This was definitely different.  I was actually somewhat relieved, because I wasn’t used to having something alive inside me for that long.  Now I would be getting rid of him.

So I swam near shore, closer than usual, and regurgitated him with as much force as I could muster.  As I swam away, fluke flapping up and down, I saw him get up and walk, so I know he was still alive.

That strange encounter happened to me only the once, and I’ve never met another whale who had a similar experience.

Now what a story I have to tell to the other whales.  This is one for the ages.

At the Garden Gate: A Choose-Your-Own-Ending Story Nothing In My Hands, Chapter 3