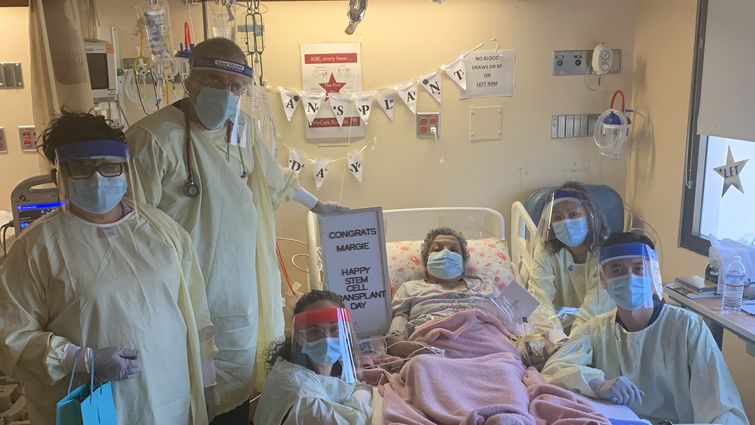 “It was a historic day,” said Mojtaba Akhtari, MD, a hematologist-oncologist at the Cancer Center. “This is a success story for LLU, all the staff members who work here, and for citizens of the Inland Empire in Southern California who could benefit from this kind of transplant.”

Though Martinez is one of the few patients in the region who have benefited from the hematopoietic stem cell transplant — a type of transplant in which stem cells produce blood cells — offered by the adult bone marrow transplant (ABMT) program, she is the first adult to get the haploidentical, or “haplo,” stem cell transplant. Akhtari said haplo transplants, in which healthy first-degree relatives can often serve as donors and need only be a 50 percent genetic match to recipients, present a new and novel way of performing stem cell transplants.

“Life came to an abrupt standstill,” said Martinez, who, upon hearing of her blood cancer diagnosis, stopped working after 35 years as a nurse at Loma Linda University Medical Center’s maternity unit. Symptoms of fatigue and easy bruising led Martinez to her doctor’s office and subsequently to visit an emergency room on an October night in 2019. Results from a bone marrow biopsy indicated she had acute lymphoblastic leukemia (ALL).

Martinez spent two months in the hospital, followed by frequent trips to the ICU for neutropenic fever and other complications. Despite being on chemotherapy treatment, her disease progressed.

Chances of surviving a disease like ALL without transplant for even a year are slim, said Akhtari, who deemed Martinez would benefit from hematopoietic stem cell transplantation. He first altered Martinez’s treatment regimen to immunotherapy to get the disease under control, and then began identifying appropriate stem cell donors who were close matches.

With Martinez’s acute leukemia back under control and some donor candidates on the radar, the time had come at last for a transplant of stem cells — but that was in March 2020, just as the COVID-19 outbreak swept the state. The unprecedented circumstances led to a six-month postponement of Martinez’s transplant, during which her disease progressed a second time, and previously identified donors for stem cells were now no longer available.

It was Martinez’s youngest son who stepped up to donate his blood stem cells, in August 2020. Quickly taking action, Akhtari said he and nursing staff coordinated efforts to prepare both son (the donor) and mother (the recipient) for the haplo transplant process.

“Stem cell transplant takes a village, and it was thanks to good planning and teamwork that we were able to get Margarita through the transplant,” he said. Akhtari is grateful to nurses Melissa Guarneri, Katie Lew, Maria Montero, Jordan Mojica, Linda Moran, Barabara Garcia, Eric Salasayo, Carol Nielsen, and Adela Diaz, as well as pharmacists Erika Wass and Michelle Safier for their hard work.

The recipient, too, must prepare so that their body does not reject the donated stem cells. “Conditioning” involves weakening the recipient patient’s immune system via radiation and chemotherapy to make way for new stem cells to latch onto bone marrow effectively. Martinez underwent this six-day process before receiving her son’s stem cells through IV tube on August 19, 2020. She left the hospital four weeks later without complications.

Doctors’ visits over the past couple of months confirm that Martinez has no evidence of leukemia in her body. She now rests at home and spends time with the newest member of the family — her 21-month year old grandbaby.

Since Martinez’s haplo stem cell transplant, another patient has already benefited from the same procedure and even more await their turn, Akhtari said. He said LLU’s multi-specialty and academic infrastructure has enabled the opportunity to develop a strong program for different kinds of hematopoietic stem cell transplantations, which joins the set of other established transplant services at LLU.

“As an academic medical center, we have experienced staff at all levels — from nursing to labs, blood bank, subspecialties, and pharmacy,” Akhtari said. “When we connect all the dots together, we can provide a first-class, 21st-century care to our patients.”

Akhtari said patients are required to stay close to transplant centers for three months post-transplant in order to be seen twice a week. A program for transplanting hematopoietic stem cells in the Inland Empire is a valuable service for people living in the region, especially those who cannot afford to frequently travel long distances to receive care in other counties.

To learn more about the stem cell transplant program, call 951-290-6379 or submit a request for additional cancer care information here.