Yesterday General Conference (GC) lawyer Karnik Doukmetzian pulled me aside to say that I had misled some folks on Friday with my description of how the division president is selected. I had already discovered my mistake and corrected it, but I am most apologetic for getting it wrong in the first place. Probably at least partially because of my mistake, I put Karnik to the trouble of having to explain it to the group this morning. (Sorry, Karnik!)

So to review: how is a division president chosen?

A division president is a GC officer. So he (undoubtedly “he”) will be chosen at the GC session in Indianapolis by a vote of that session. But nomination is a more regional matter.

Please understand that because the North American Division (NAD) is now only 6% of the world church, out of roughly 2700-2800 delegates to the General Conference session, the NAD supplies only 208. (That’s more than 6%, because it includes some ex officio members.) So in a 350-person nominating committee (yeah, I know—350 people on one committee!), only 21 will be representing the NAD.

These 21 will form a caucus—a sort of mini-nominating committee—and will bring a candidate to be NAD president. That name returns to the full nominating committee for final approval. Now, usually, the name they bring is approved. But not always. In 2010 the Southern Asia Division caucus chose Gordon Christo, a much-respected pastor and academic from India. Elder Wilson overrode their choice and insisted on Ezras Lakra.

After that, the nominations are taken to the floor of the session for approval. Although it could happen, it is unlikely that the session would fail to approve a division’s selection. But again, with this opinionated and controlling administration, anything could happen.

Who do you think would make a good NAD division president? Talk amongst yourselves.

I’ve been impressed with Randy Robinson, the NAD treasurer. He seems competent, spiritual, adaptable, and a good communicator: the Big Four for a good church leader.

What endeared him to me, a lifelong pastor, was his philosophy of finances: to keep always in mind “Grandma and Grandpa Jones” who sit down each month and happily write their $150 tithe check. “Don’t forget the little givers. I am exceedingly grateful for individuals who have the capacity to give large amounts of money. Some give millions. But the bread and butter of the church is Grandma and Grandpa Jones.” For the last seven years of my ministry I pastored little Appalachian churches full of Grandpa and Grandma Joneses. I never took for granted their kindness in letting me be their pastor, and paying me to do it.

Though we’re nearly through 2019, the last full year of data is from 2018, which is why it’s still mentioned often in a report like this. I’m going to assume that most of you who want to know technical measures will take a look at the slides on the Adventist Today (AT) twitter feed. I’m going to tell you what I found interesting.

Let’s just admit that most of us don’t really understand auditing—how it works, or what they’re looking for—beyond a vague sense that it’s supposed to keep us honest with our money. I will just say that the latest auditing opinion for the NAD was clean, standard, and policy compliant—thanks, Elder Robinson and team!

Robyn Kajiura of the General Conference Auditing Service (GCAS) said that in the NAD there are 319 clients. About 40% are educational, 20% are conferences and missions. 83.2% earned standard clean opinions, which she said represents an improvement.

Although there’s been much written about the number of problems GCAS finds across the world field, Robyn said that many of these aren’t major flaws, but things like not having conflict of interest statements from all the board members. Still, there are big serious problems, too, and roughly 5% of institutions here in the NAD are, to quote Minnesota president Justin Lyons, “so messed up they can’t be audited.” Yeah, it’s a problem.

(Which led to the observation that it’s been hard to find financial professionals to work for the church, and Robyn and others have been involved in trying to recruit young accounting and business majors.)

Elizabeth Talbot raised with the NAD leaders the same question that John Thomas raised with Elder Wilson a few weeks ago: does financial noncompliance, when discovered in audits, fall under the three-step compliance procedure voted in 2018 (warning, reprimand, expulsion)? Elder Robinson said it was important that we raise our standards with regard to financial management. However, “I will let other people decide how that relates to compliance document.”

Elder Jackson: We will pressure organizations to be financially accountable, but “to apply that full [three-part] practice as described in the document of 2018, we are not, and until at least until July of 2020, we will never, reprimand anyone publicly.” “What happens after that is another matter entirely.”

A fascinating comment from Tim Northrup of Adventist Risk Management. He said that we’re not uncovering fraud quickly enough. Fraud loss in the NAD in the 30 years before 2013 was about $700K. Since 2013—only 6 years!—it’s already $900K. That fraud loss is increasing should be a huge concern for us, it seems to me, and probably is a good reason for more auditors.

I’m not going to go through the breakdown of all the parts of the ARP. Look at our twitter feed for the slides. Let me just tell you a few important things I learned today from Ray Jimenez, none of which are all that encouraging for us Adventist retirees.

First, there are still a lot of people on the defined benefit retirement plan, which was frozen in 1999. All of us went on to a defined contribution plan in 2000, which has overall been a great blessing for those of us with the discipline to save. However, there are enough people who worked before 1999 that are vested in that plan, that the peak year for people drawing from that plan will be 2025, after which it will begin to decline.

The money to pay all of us into our declining years is not sitting in the bank. It is a “fund as you go” thing—the conferences are all pitching in somewhere between 12-15% of their tithe (I forget how much) into this retirement fund, and the other Adventist institutions are also funding it, too. (Even though I had 20 years under that plan, it returns a pittance in comparison with what we saved through contributions to the defined contribution plan and our own savings.)

But as legacy institutions close (like the Review and Herald) it takes more people out of the workforce and puts them in retirement, and fewer workers and fewer institutions are generating retirement funds for the current retirees to live on.

Second, for all the noise you’ve heard about the Adventist advantage in mortality, just the opposite is true for Adventist church workers. We are dying faster than the general population. 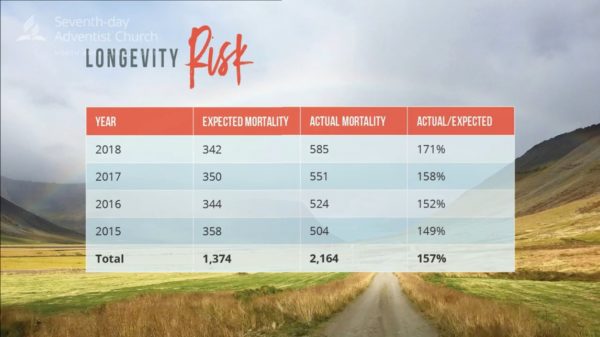 The word “mortality” there is a euphemism for “dead people.” In a group like ours, 342 people would be expected to die in 2018, but 585 actually did. In other words, we church workers have pretty bad life expectancy! While Adventist lay people live longer than the population, Adventist workers don’t live as long! This is so serious that the actuarial charts ARP uses have been adjusted downward for us!

Ray Jimenez rather shamefacedly admitted, “This actually helps the plan.” Enough of us die young, and there’s more money in the plan! Good news, right? Except, of course, for all of us who die young.

Is there a reason for this? We need to learn more. But if it’s true that sitting is one of the most unhealthy things you can do, meetings like this one are taking years off our lives.

Treasury brought a recommendation for a 1.6% cost of living (COL) adjustment for pastors beginning in 2020. You’d think that fairly modest increase, when most of the people in the room are on the payroll, would pass easily.

Yeah, but not so fast. It was eventually approved, but not without objections.

The problem, you see, is that many small conferences simply can’t afford to keep up with these yearly COL adjustments. For some of the years I worked in the Ohio Conference, we didn’t get the full COL raise. And I understand that it’s hard to say to your workers, “Well, sorry, you’re supposed to get an extra $50/month like the conference next door, but we can’t afford it.” Some of the leaders of the struggling conferences wanted no one to get a raise until all of the conferences could afford it. As one conference president said, “The children of Israel all passed through the Red Sea as a group.”

I confess, I’m cautious by nature. I’m a German North Dakota farmer, after all. You need to prepare for the years when you don’t get a crop. And we’ve got some pretty good indications that there are lean years ahead for the NAD church. I’m not the only one who thinks so. Ever since these meetings have started, Elder Dan Jackson has alternated his optimism about the church with warnings about certain aspects of its future. In his report on Friday, he said, “I’m a firm believer that we don’t need 59 conferences and missions and nine unions and everything we have. We have inventions today, planes, jets, etc. One day our economies are going to dictate to us that we can’t have 59 conferences and missions, and nine unions, and 20 million-dollar camps.”

It was one of the smartest things I heard said all week. Because he’s right. Even 2018’s record tithe doesn’t solve very serious problems in our future. We know how old the church is getting, that the young aren’t as sacrificially devoted as their elders were, that redundant educational institutions are on life support, how many small churches are dying, and that we can’t seem to reduce administrative overhead even when we know we can do it easily—you know, with those modern inventions Elder Jackson references, like planes, telephones and the internet.

I hope people are listening. Because it’s time to start acting strategically by targeting our efforts and measuring their effectiveness, not just doing things we’ve always done, or creating new, untested materials just because we can, but that end up in dumpsters.