National TV show, ‘Life on the Line,’ back for a second season

Editor’s note: Last spring (2014), Loma Linda University Health unrolled their first national TV show, a documentary with six inspiring half-hour dramas, called “Life on the Line.” That first year’s stories showcased the broad reach of LLUH, showing episodes from California, where the hospital is based, to the Amazon jungle and the Philippines. According to LLUH Media Relations Specialist Briana Pastorino, the show had a successful year, and the second year is about to begin. 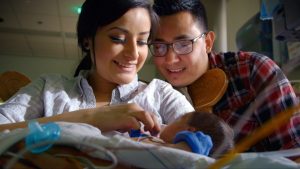 In the first episode of “Life on the Line,” Janett Anguiano and Gian Ledesma hold their baby, Theodore, for the first time 10 days after he was born.

By Briana Pastorino, LLUH     Loma Linda University Health’s first national TV show, “Life on the Line,” is coming back with a second season airing on public television stations across the nation beginning August 12.

The show’s first season was successful, airing on nearly 300 public television stations in over 125 markets in the United States. The documentary series features stories of strength and resilience – from a newborn fighting for his life to the International Behavioral Health Trauma Team dispatched to the Philippines following a deadly typhoon.

Narrated by celebrity journalist Lisa Ling, “Life on the Line” season two features seven half-hour episodes. The first episode, “Rough Beginning,” follows the journey of a couple – Janett Anguiano and Gian Ledesma – expecting a baby boy who will be born with a life-threatening condition, gastroschisis, a birth defect in which the intestines are outside of the body. Without immediate medical treatment, baby Theodore’s life will be in danger as soon as he is born.

“I was scared to hold him when he was still so fragile,” Ledesma said of the day he held his son for the first time.

After undergoing two surgeries, fighting infection and healing, Theodore was on the road to recovery.

“I was overwhelmed,” said Anguiano when she held 10-day-old Theodore for the first time. “To feel his warmth was one of the best days of my life.”

Additional episodes of “Life on the Line” season two will follow the lives of two young children born with heart disease in Nicaragua; survivors and the aftermath of the typhoon in the Philippines; organ transplant recipients and others who struggle to survive their individual, unforeseen circumstances.

“It is a privilege to share these inspiring stories with our viewers around the nation,” said Cosmin Cosma, director, advancement films at Loma Linda University Health. “This show is about how real people find meaning in the midst of a tragedy. This is where the real story lives and their strength of spirit shines.”

Watch and experience Loma Linda University Health’s mission to continue the teaching and healing ministry of Jesus Christ through these inspiring stories of resilience and courage.

For the full schedule, episode previews and more information about the show visit lifeontheline.tv.