In Search of a Plot: AT’s Mission for the Adventist Future

It was the Summer of 1970, not a Classic summer, as Baby Boomer summers went, but still very groovy. With millions of other young Americans that year I would turn 18 and register for the draft and maybe end up in Vietnam.

And with that Coming of Age, would come (if not Vietnam) college, travel, and a lot of decision-making. But as we drove up to the front entrance of the Hilton in Atlantic City, I had a more immediate challenge: I had flat-out read every book in my knapsack. I knew, though, that the Church had brought in tons of its latest Adventist books and recordings to the 1970 General Conference Session.

Once inside the book center, I began pacing the aisles, nodding at smiling members of the Faith for Today Quartet, the Voice of Prophecy, and George Vandeman himself (I shook his hand, and though he was still in his 50s, his handshake wasn’t all that firm.)

In the matter of reading material, nothing caught my attention on the display tables and shelves, right off, except for a paperback by a California media man named J.O Iversen, titled “In Search of a Plot.” The title shouted “Conspiracy”, and I picked it up, paid the then exhorbitant $2.95, and moved on, but not before getting a bit better acquainted with my new book.

It started out slow—very slow—in typical rabbinical treatise form written by a Church leader. The book seemed stuck in “Park.” I smelled the Vegetarian Chili at the food bar, and paid $1.37 for the beans and stowed away the book, never to flex its covers again. And that was it for book shopping as I caught a glimpse of some old friends from South America, and we were off to the races.

Several years later I met the author of my “search for a plot book” and recognized the value of some of his ideas. But his book had not spoken to me, in its time. We were a tough generation, in love with the new and with a very short attention span for the old. We were, in fact, a lot like my kids and grandkids today.

This past summer GC in San Antonio reminded me a great deal of Atlantic City. Once again, we seemed consumed with the past. Given the tenor of the women’s ordination question, we were no longer quite sure if there was a plot behind what the Church was doing, let alone why it was important to ferret it out.

Back in 1970 (when I had intended to be reading my book) I jotted down a few reasons why I felt disconnected from the kind of organization reflected in some of the books published by the Church in those days. Sociologist George Barna has listed similar items, but in a much more organized way than I had done back in 1970, so here goes.”

Reason #1 – Churches seem overprotective…. As Christians, young people express the desire for their faith in Christ to connect to the world they live in. However, much of their experience of Christianity feels stifling, fear-based and risk-averse….

AT’s Response: The Adventist Today board has voted to expand our publishing program to publish 12 books a year, designed to present a vision of ministry that addresses the needs of our culture and offer guidance to those who wish to have an impact on that culture.

Reason #2 – A second reason that young people depart church as young adults is that something is lacking in their experi-ence of church. One-third say “church is boring” (31%). One-quarter of these young adults say that “faith is not relevant to my career or interests” (24%), or that “the Bible is not taught clearly or often enough” (23%). Sadly, one-fifth of these young adults who attended a church as a teenager said that “God seems missing from my experience of church” (20%).

AT’s Response: The AT Features section continues to increase its coverage of trailblazing ministries in North America, those meeting with success in presenting the gospel in an acculturated, exciting, and relevant way….

Reason #3 – Churches come across as antagonistic to science. Another reason young adults feel disconnected from church or from faith is the tension they feel between Christianity and science. The most common of the perceptions in this arena is “Christians are too confident they know all the answers” (35%). Three out of ten young adults with a Christian background feel that “churches are out of step with the scientific world we live in” (29%). Another one-quarter embrace the perception that “Christianity is anti-science” (25%).

AT’s Response: AT continues to present information and articles that illustrate how the concept of divine creation can harmonize in various ways with scientific views on adaptations of species. This has offered many a way to discuss these matters intelligently with thought leaders and in academia, without feeling they must reject creationism, on the one hand, or accept evolution on the other.

Reason #4 – Young Christians’ church experiences related to sexuality are often simplistic, judgmental…. One of the significant tensions for many young believers is how to live up to the church’s expectations of chastity and sexual purity in this culture, especially as the age of first marriage is now commonly delayed to the late twenties.

AT’s Response: This is a topic of great interest and salability. We intend to look in a rational and spiritual way at this topic….

Reason #5 – They wrestle with the exclusive nature of Christianity. Younger Americans have been shaped by a culture that esteems open-mindedness, tolerance and acceptance. Today’s youth and young adults also are the most eclectic generation in American history in terms of race, ethnicity, sexuality, religion, technological tools and sources of authority….

AT’s Response: Adventist Today intends to address younger Adventists from within a culture that exhibits openmindedness, tolerance and acceptance. This will be frowned on by those who believe that young people must essentially withdraw from American culture, but there is indeed a need for materials that address questions of how to be in the world, without being of the world.

Reason #6 – The church feels unfriendly to those who doubt. Young adults with Christian experience say the church is not a place that allows them to express doubts…..

AT’s Response: AT believes that difficult issues raised by young people must be addressed, not hidden away as in the past. The books and articles AT publishes will continue to be guided by the needs of younger generations (as well as their parents’) that are wrestling with questions that tempt them to give up entirely on the Adventist culture and belief system….

We Must Act Now

There is a strong tide of fear and loathing in the Church, against any and all who do not agree precisely with our leaders at the top. There is fear of contamination, a fear that associating or relating in Christian dialogue will damage us as an end-time community. AT needs to do more to counteract this fearful, finicky attitude toward the secular and non-Adventist cultures. We need your moral and financial support, especially as we reach the end of 2015.

We envision a day when we will not only continue to publish special issues, (as we have in July and October of this year about GC and its aftermath), but to very soon greatly expand our book catalog with titles of special contemporary value to searching youth and young adults. There is great demand for this kind of literature, today, even as there was unanswered demand back in the 1970s. Once again the Church seems disinclined to seriously fill the void; AT is stepping forward to act on behalf of the youth of this era.

Adventist Today needs to raise $30,000 by the end of this year to address more and more strongly the important questions of searching young people. We need to increase the number of bright, gifted youth writing for our publication online and off (you have read some of their excellent work in our most recent issue). We need your support now to reach out to those who are trying to plot their course in a Church that seems to have fallen in love with its rear-view mirror.

This is a season of general financial plenty; what better way to help point our Church forward than by doubling or tripling your normal yearend gift to Adventist Today, before December 31…. Now is not a time to sit back and contemplate; Adventist Today is primed to advance. We are motivated. In the wake of San Antonio, we believe you are, too. 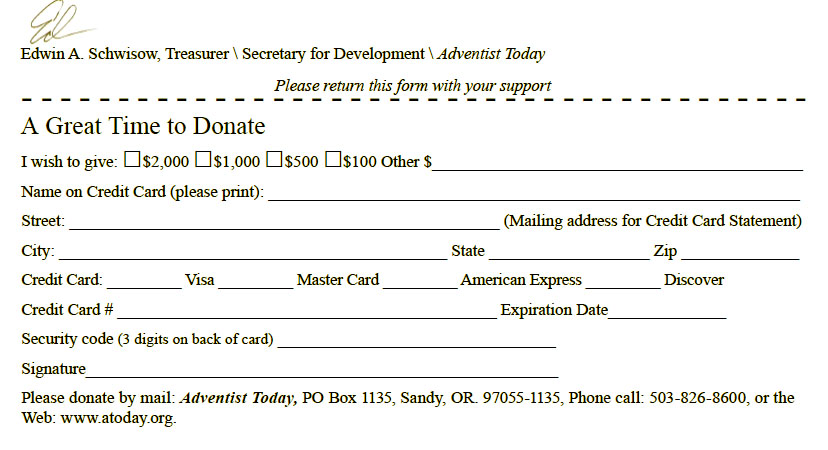 Robert Folkenberg, Former President of the Denomination Dead at 74 Thy Kingdom Come…