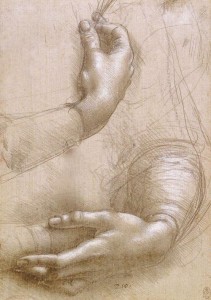 My little grandson just turned five.  He has not yet manifested which will be his dominant hand.  None of his relatives care; our regard is not conditional.  We know of an adult whose lack of hand-eye coordination may be attributable to being forced (or strongly encouraged) from sinistral to dextral when young.  That was in another time, of another generation, which was less enlightened.

I’ve observed him and think his dexterity appropriate for his age.  Having watched him use scissors, I lean toward his ultimately being a lefty.  When asked which hand he feels more comfortable using for fine motor skills, he expresses no preference.

Cross-dominance or mixed-handedness—the change of hand preference between tasks—is fairly common, with about 30% prevalence.  True ambidexterity, however, is rare.

In 1992, I watched the U. S. Presidential debates.  I found it interesting that all three major candidates—Bill Clinton, George H W Bush, and Ross Perot—were left-handed.  About 10% of the populace is left handed, so the odds of three southpaw* politicians together on one stage is 1/1000, or 0.1%.  (*The term derives from Chicago baseball, in which a park was oriented east-west, with home plate west; a left handed pitcher threw from the south.)

The odds of three of our last four Presidents being left-handed are also slim (all other things being equal, and of course they never are, statistically, at most one of the four should have been a lefty).

There is a genetic predisposition to laterality, in that, if both parents are left handed, offspring has a roughly 25% chance of being sinistral.

Examination of walls of caves from Neanderthal times confirms the majority of them, or at least their artists, were right handed.  It has ever been so.  No culture with left-handed predominance has ever existed.

While society is geared for the right-handed (it is more awkward/difficult to write sinistrodextral if left-handed; more tools/utensils are designed for the right handed), there are certain instances wherein being a lefty may be advantageous.  Such as in tennis, fencing, boxing, martial arts, and even baseball.

Holy Writ affirms the physical prowess of some lefties:  ‘           …there were seven hundred chosen men left handed; every one could sling stones at a hairbreadth, and not miss.’ – Judges 20:16.  While some right-handed stone slingers may have had similar skill, none were specifically recorded to have been as accurate as this particular subset of Benjaminites.

Given the preponderance of right-handedness, one might wonder why God would choose, in the Judgment, the metaphor of those at His right hand being righteous (and, conversely, those at His left hand being wicked).   The majority of humankind will not experience a benign afterlife (“… narrow is the way, which leadeth unto life, and few there be that find it” – Matt. 7:14), but, rather, it will be the minority, as are those left-handed.

However, ‘right’ figures in one of the definitions of ‘righteous’; the two words are easily remembered together.

The word ‘sinister,’ which has negative connotation, derives from ‘left.’  A ‘left-handed compliment’ is a criticism or insult disguised as a compliment.  There are also numerous examples of social stigma in languages other than English attached to left-handedness. For instance, in French, ‘gauche’ means ‘left’ as well as ‘awkward’ or ‘clumsy,’ while ‘droit’ (related to ‘adroit’) means both ‘right’ and ‘straight’ as well as the legal sense of ‘right.’

Limb dominance (or cerebral laterality) has been demonstrated in various members of the animal kingdom. While consideration of such is beyond the purview of this essay, one practical application has to do with guide dogs.  Certain dogs may do better walking to the right or left of their sight-limited owner.  Determination of that may be an important factor as to the ultimate success of the canine as a guide dog.

One has only to read God’s astonishing conversation with Job (Job 38-41) to be properly awed and to sense the vast gulf between Creator and man that is bridged because the Infinite chooses to commune with us.

That alone should be cause for gratitude and humility and to cause us, whether left or right handed, to endeavor to be right with God and with our fellow man.