The Conditions by Henrich 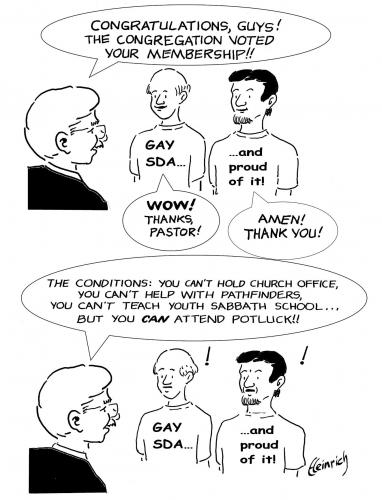 A gluttonous, intemperate, unrepentant obese person will stand arm and arm with the unrepentant homosexual outside the gates of New Jerusalem at the second resurrection. All those who repent and TURN AWAY from there sin whatever it is will be on the inside looking out:)

Re: The Conditions
On March 16th, 2011 Seminarystudent1 says:

Seminary Student , I disagree that is no biblical basis for that argument , in the Old testament what was the punishment for being fat ? and for homosexuals ? Leviticus 18 , Abomination to the Lord .

Re: The Conditions
On March 16th, 2011 CherryAshlock says:

Find your wings and soar!

At times all of us are abominations unto the Lord….remember the plank in your eye………

" At times all of us are abominations unto the Lord….

I have never seen any human that could be called an abomination. Is that the way God sees us? Why did He give His life for abominations? If we are made in His image, we are worthy of His love, not His condemnation. When did Jesus ever call anone an abomination?

Re: The Conditions
On March 16th, 2011 Seminarystudent1 says:

Elaine ,Interesting that you like to quote Paul, strange that you only quote him in some areas that you think he agrees with you . let's see what he says in Romans 1 22 Although they claimed to be wise, they became fools 23 and exchanged the glory of the immortal God for images made to look like a mortal human being and birds and animals and reptiles.

24 Therefore God gave them over in the sinful desires of their hearts to sexual impurity for the degrading of their bodies with one another. 25 They exchanged the truth about God for a lie, and worshiped and served created things rather than the Creator—who is forever praised. Amen.

26 Because of this, God gave them over to shameful lusts. Even their women exchanged natural sexual relations for unnatural ones. 27 In the same way the men also abandoned natural relations with women and were inflamed with lust for one another. Men committed shameful acts with other men, and received in themselves the due penalty for their error.

so are you going to not agree with Paul here ?

I don't want to sound that I hate these people , I am just saying what the bible says about sin . At the same time , I love these people and I pray for them and try to work with them showing them from the bible that Jesus loves them and that there is power in the gospel to change their lives . If I see some one walking into a broken bridge , shouldn't I not warn them ? should I just see people perish and go to lake of fire and be indiferent ? No , The Love of God needs to move us to love these people and work with them and for them.

Re: The Conditions
On March 17th, 2011 Seminarystudent1 says:

Paul was accurately describing the Roman-Greco world in which he lived.

Remember: There is a world of difference between DESCRIPTIVE and PRESCRIPTIVE.

Throughout scripture, there is no recognition of homosexuality as a CONDITION. The conditions which Paul was describing was debauchery, whether heterosexual or homosexual. HIstory of this period shows that it was very common for Roman men to have a younger "boy lover" and a wife to bear his children. If it's the sex that is condemned, is love condemned between same sex? David and Jonathan were lovers, and he loved Jonathan "more than the love of women." Now, that's a conundrum that needs explaining.

I guess people are simply tired of arguing about Gays in the SDA denomination. Dr. Ron Stone is the most knowledgable person I have met regarding gay issues. As far as I know, he has been banned from both Spectrum and AToday.

Gays come in all shapes and sizes, well educated and articulate, as well as low life trash. Certainly the gospel invitation extends to all. Recently there has been some noise because of the Exodus International iphone app. Some gays are repulsed at the obviously unAmerican position taken by reactionary gay interests, actions which would effectively silence free speech by removing a voice from the public square.

I recently heard that some people in England, after seeing homosexuality morph from repulsive to tolerable to acceptable to desirable, are planning to move to the continent before it becomes compulsory.

No doubt churches in Southeastern CA will be clamoring for a gay pastoral couple before long. Perhaps they already are concealing a couple in a closet somewhere, discreetly parading them around potluck on Sabbath afternoon.

Is this now not becoming just another "Spectrum"? How can that be when AT alludes to representing the voice of Adventists in which the majority may not even hold many of the positions of the highlighted views on this site. Why is it that more of these minority positions (although significant as they may be) are largely voiced over the majority position of the Bible and Church at large including SDA's? Doesn't the Bible teachings also count? Or is science, politics or culture that is the dictator of what is Truth and what is Sin? Is there a dynamic in science that posits the Biblical plan of Salvation and the definition of what sin is? Science makes no provision for the Sinner except that it provides plenty for the Sinner to indulge in. The Bible stands on it's own in this regard. It is a 'paper' on John 3:16. Science is what it is: science!

This cartoon from a secular worldy view may be funny, but from a Biblical view, an insult to the God of heaven and earth. Period.

Is that what 'church' is about for some: positions and potluck? What about sin which put Jesus on the Cross? Doesn't that also matter? Or does culture and state politics control God and His Church?

I thought the point was not whether it was aceptable to be gay, but the problem with saying 'yes' but adding so many 'buts' that you have effectively said 'no'. An honest answer would have been a simple 'yes' or 'no'. Church membership either exists or it doesn't – there is no provision for 'conditions'.

It would have been better not to grant them membership. This cartoon only highlights the problems that arise when we compromise our beliefs. If it had been peadophiles or a pair of drug lords, would we have let them join?

This is not to say they could not attend and enjoy the fellowship and friendship of the church.

One who married a divorced person used to be guilty of "adultery," and lost his SDA membership.

Today, if all divorced people were kicked out of the church, half of the membership would go. What is called "Sin"changes over time and now become respectable. Living together before marriage? Does the officiatng minister even ask about this prior to the ceremony? Unwed pregnanciy (The Scarlet Letter) was once the worst of sins. How do Adventists relate to that today? Should the church expel only the girl? What about the father-to-be? The last sin is homosexuality, but in another 10-20 years, when many "good" SDA youth are so categorized, things will also change. All sin is "other people's sins."

Notice that all the above "sins" are sexual in nature. Christian have always had a strange attitude about sex. Celibacy in that past was one of the great virtues, and some of that is still seen in religions today.