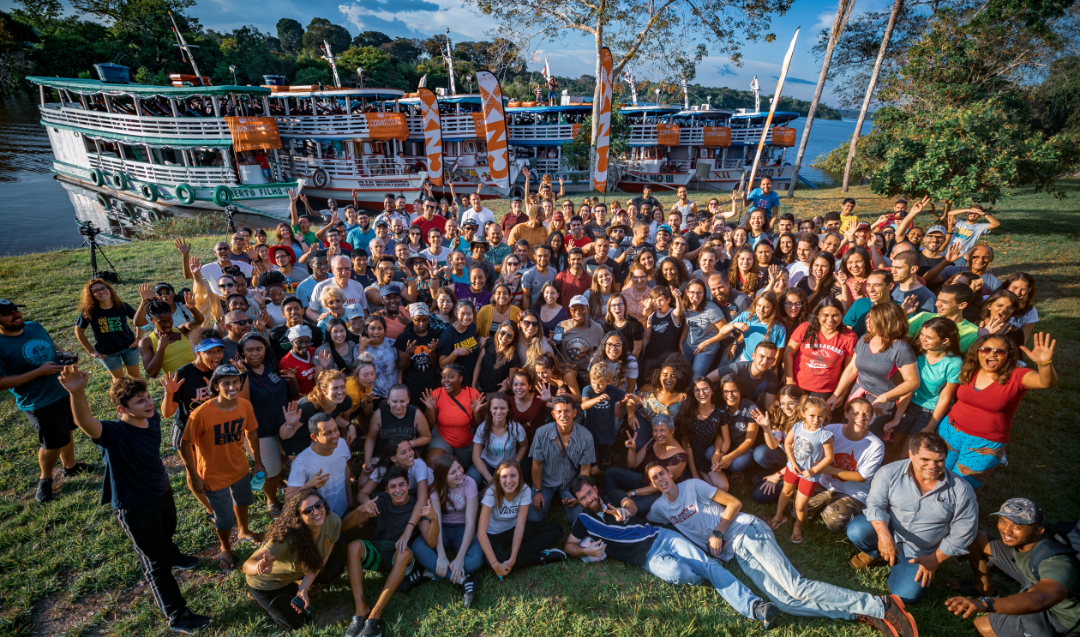 30 July 2018 | From an ADRA news release: Over 220 university students across North and South America took part in the Adventist Development and Relief Agency’s (ADRA) new volunteer program “ADRA Connections” this July in the Brazilian Amazon.

The students assisted in the construction of the Adventist Technical School of Massauari (ETAM) in Brazil. The school enrolls 45 students, aged 5 to 14, who previously had no educational background.

ADRA Connections is comprised of hands-on projects that currently cater to and engage university students willing to help communities most in need.

ADRA Connections Extreme trips like this one involve larger scale construction and community development projects, encourage student volunteers to learn about different cultures while connecting with local dwellers, and serve as an avenue for students to develop new friendships.

“I wanted to come on a volunteer trip and never had the opportunity,” said Raiane Porto, a music education major at UNASP in Brazil. “This year God said it was time, and since February, I planned and saved so that I could go to the Amazon.”

When students arrived in the city of Manaus, Brazil, they quickly became immersed in the rainforest territory. From the airport to the school, students piled into seven boats to ride from Manaus down the Amazon River, which lasted 30 hours. The only way to get to ETAM was by boat.

Once at the school, students had no Wifi or phone connection and relied heavily on bottled water, facing intense heat and sleeping in hammocks.

“It took me by surprise how the indigenous people lived. Their houses have no insulation, and they use water from the river to drink and bathe,” said Deborah Kim, a human biology pre-med major at Kettering College in Ohio. Kim wants to be a medical missionary and saw ADRA Connections as a way to get that first-hand experience.

Students worked from dawn till dusk assisting with construction, putting up telephone poles, placing tiles on the floor, and painting. During breaks, students enjoyed swimming at the beach, playing with pink dolphins, meeting local villagers, and going on a nature walk.

“Meeting new people was what I looked forward to when I signed up,” said Tayler Dixon, a communication student at Oakwood University in Alabama. “We’ve been doing a lot for the school as well: building houses for teachers, painting, putting tiles down, putting windows up, wiring electricity, and helping out with kitchen duties, like cooking.”

“We also worshipped every day, and it helped me to reflect on the bigger purpose for our hard work, and that was we did this for the kids,” said Ashton Harden, a business management and legal studies major at La Sierra University in California. “Education is important, and the kids deserve this school,” she added, “I didn’t realize it before but by building a school for them we are impacting their lives and they in turn impact us.”

The construction of ETAM initially started seven years ago when local villagers shared their need with mission leaders for a bigger school.

“At the time, 20 children were receiving lessons in a small room and one of our staff members named Poliana on ADRA Brazil’s team taught them,” said Daniel Fernandes, a nurse by trade and founder of the school. “But the class grew as parents saw that the children being taught were able to read and write. Of course, holding them in one room wasn’t sufficient and more classrooms were needed.”

In 2015, the first two classrooms were built, thanks to more than 30 mission groups who helped. However, getting enough aid to construct the school became a hurdle. “We thought it would take 10 years to build the school, but when we got in touch with ADRA Connections to aid us with volunteers, we saw God working and knew we could build the school sooner,” says Fernandez.

On July 20, the school complex was finished, and an inauguration ceremony dedicating the school was held.

“It’s an unexplainable feeling; the kids had dropped jaws when they saw their new classroom,” remarked Gabriela Dos Santos, a teacher at ETAM who works with students ages 4 to 6. “I also think the houses for teachers are beautiful. It’s a joy to see something so well done.”

“We are truly thankful to everyone for their time, effort and money to help put this school together. ETAM would not be possible without you,” said Poliana Peixoto, ETAM’s principal who served as the school’s first teacher and now oversees six teachers.

The school complex also featured a new library, cafeteria, five houses for missionary teachers, an urgent care clinic, a chapel, and dormitory for girls and boys.

The Adventist Development and Relief Agency International (ADRA) is the main humanitarian agency operated by the Seventh-day Adventist Church. It operates worldwide.

Group photo of all volunteers just before they head to the school. Boats they rode on in the background. Photo credit: Arjay Arellano, ADRA International)