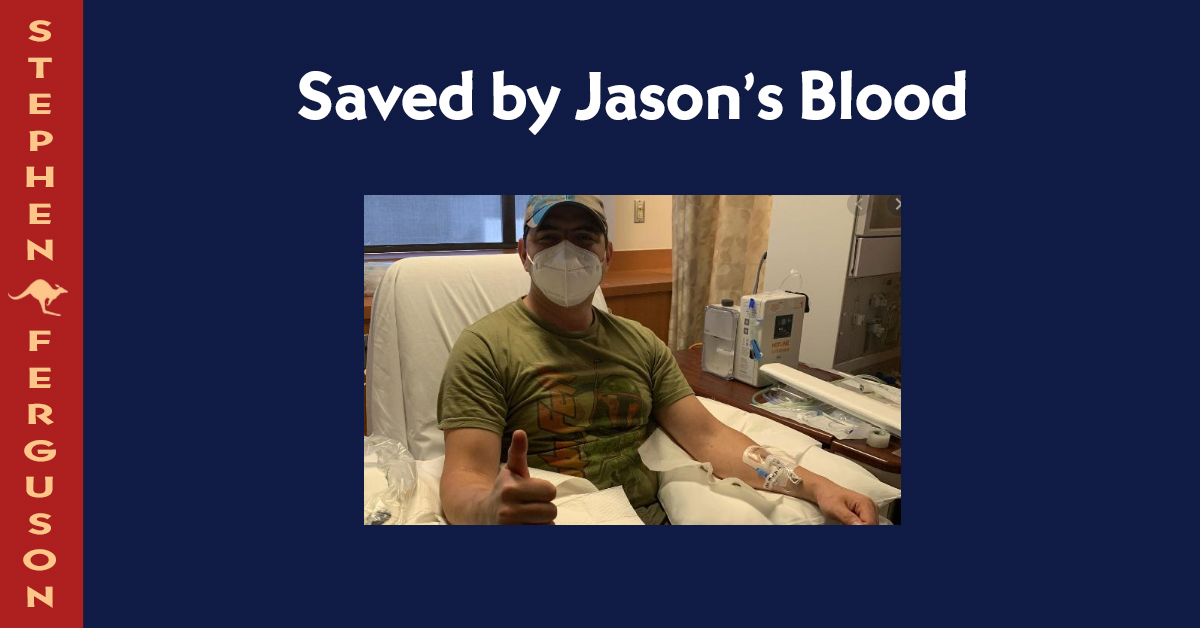 As CNN reported in an article by Hollie Silverman dated April 6,

“He recovered from the coronavirus and now his plasma donation could save the lives of others”:

“On March 6, Jason Garcia noticed he had a mild cough and some congestion.

“The 36-year-old aerospace engineer from Escondido, California, didn’t think that much of it. But later while on a work trip, he noticed a headache had begun accompanying his cough. Within a day, he also had a fever and body aches that quickly came and went. Then he began experiencing shortness of breath.

“He was sent home and received a call on March 14 letting him know he had tested positive.

“…He started to feel better and on March 18, he said, he considered himself ‘symptom free.’

“Around the same time, health officials at St. Joseph’s Hospital in Orange County, California, also took to social media to say they were looking for someone who had been diagnosed with coronavirus and had recovered to help with an experimental treatment to potentially save the life of another coronavirus patient.

“The plasma donation will allow the current coronavirus patient to receive antibodies from Garcia, a recovered patient, to help fight the disease.”

In the very bleak situation almost every one of us is now finding ourselves, bombarded daily with the worst of news, I found this to be a rare story of hope and optimism.

The more I thought about it, the more I thought this story was also an almost perfect analogy for the problem of sin. When we think about it, sin is the original disease, with a 100% mortality rate—as deadly as it is, COVID-19 is only its latest mutated strain.

And if sin is ultimately a disease, then this might help us better appreciate the way to deal with it. Can we find a spiritual ventilator? How about the theological equivalent of hydroxychloroquine? What about some type of lasting vaccine?

Should we understand salvation in medical rather than legal terms?

Normally when we think of the plan of salvation, most Christians think of it as a legal problem. That God’s law was broken and that there needs to be an accused criminal, a trial, evidence, judgment, and punishment. As a lawyer, of course I endorse that metaphor, as it is how my own mind naturally thinks about the issue.

Nonetheless, it isn’t the only way to think about salvation. When Jesus publicly announced His ministry as proclaiming freedom for the prisoner and restoring sight for the blind (Luke 4:18; cf. Isa. 61:1), we see Him invoking both legal and medical motifs.

Seeing sin as a disease and not just a crime helps safeguard the Gospel message. Apart from anything else, we approach sick people with an empathy and compassion we rarely afford to accused criminals. Jesus made this very point Himself:

“Jesus said to them, ‘It is not the healthy who need a doctor, but the sick. I have not come to call the righteous, but sinners’” (Mark 2:17).

As Adventists, with our long history of health ministries, I think we instinctively know this.

Is Jesus a physician or the cure itself?

As many of you may well know, there are more references in the Bible to Jesus’ healing people than doing almost anything else. Yet Jesus didn’t heal all that many people, in terms of world statistics.

In a sense Jesus was more than a doctor treating symptoms. Jesus was a scientist concocting a cure. More than even that, He was the cure itself.

It is why a law-keeping motif doesn’t really explain the necessity of Christ’s resurrection, while as a medical analogy in the mould of Jason Garcia it becomes the essential ingredient. Similarly, the idea of another person’s taking our place in judgment is hard to understand legally-speaking, but in a world of organ-transplants, I think we can all understand the idea medically.

How do we receive this cure from sin?

Now that He has undone the power of sin and death in Himself, we too can share in this spiritual-cure by taking Christ into ourselves (Rom. 6:1-11). How? We obtain this cure by faith in Jesus, of course (Eph. 2:8-9).

But when Bible writers talk about being “in Christ” (Rom. 8:1), it seems a very odd idea. However, I think we moderns can imagine a sort of divine-blood transfusion or Christ-vaccine. What Jason Garcia did for California, Jesus of Nazareth did for all of planet earth.

For this reason, Jesus said we must drink His blood and eat His flesh in order to be saved (John 6:53). The idea of taking into ourselves another person’s flesh and blood doesn’t make all that much sense from a legal perspective, but it makes perfect sense from a medical one.

Do we literally drink Jesus’ blood? Of course not. We do so in faith. However, to assist our hearts and minds, we have the ceremony of the Lord’s Supper.

It is why the communion service was the focus of historical-Christian thought and practice. Of course, the institutions of the medieval Church corrupted that ceremony, turning it into the High Mass. Even so, as Protestants we have perhaps unfairly downgraded the centrality of this rite.

The fact none of us can currently hold communion with each other, due to all the social-distancing rules, is an irony that should now be lost on none of us. Foot washing would especially be out. Perhaps that is something for us all to dwell on next time we finally get to do a ceremony most of us take great steps to avoid four times a year.