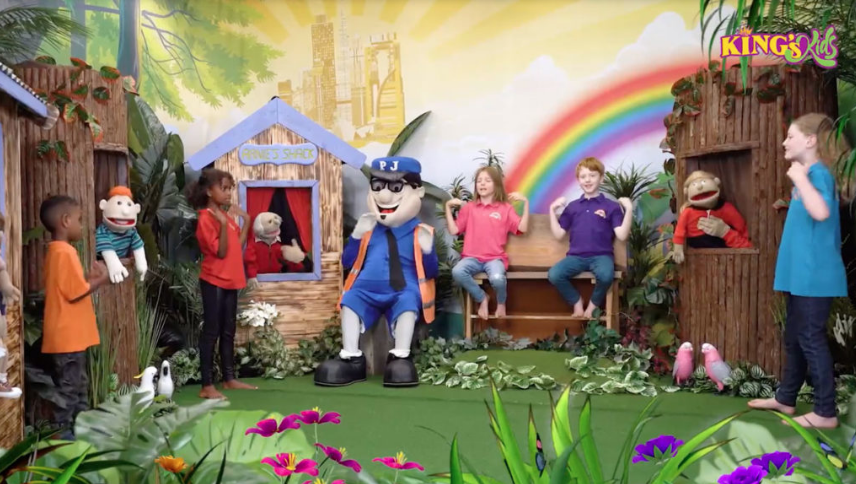 News reports from Australia, Jamaica, the Philippines, the United States.

The King’s Kids, an Australian-produced children’s show that has brought the story of Jesus into the homes of thousands of families around the world, will celebrate the premier of its 100th episode on Feb. 18, 2022, from 7 p.m. AEST at https://discover.hopechannel.com/thekingskids.

Prior to the premiere, a behind-the-scenes program will give viewers an insight into what happens on set to create The King’s Kids. It will feature interviews with the team and behind-the scenes moments including “bloopers”.


The King’s Kids is a collaboration between Adventist Media, Abide Family Ministries and the South Pacific Division. The program was launched in 2020 to assist and minister to families during the first extended COVID-19 lockdown. Since then it has become an international hit, broadcast in more than 70 countries worldwide, filling a gap in quality Christian TV content for children.

Eight series have been produced since the first episode, “Calm in the Storm,” launched on March 28, 2020. Series 1 has been translated into Romanian. A Vietnamese pilot program also has been created.

Ready for Their Close-up

The 48th Annual Charles Weniger Awards will be held at the the Loma Linda University Church (LLUC) in California, U.S., and live-streamed at lluc.org for the LLUC vespers on Saturday, Feb. 19, 2022, at 4:30 p.m. PST.

The Charles E. Weniger Society for Excellence exists to sustain the memory of the legacy of Dr. Charles Weniger, a man committed to excellence in conviction and deportment. As a highly respected professor of rhetoric, preaching, and public speaking whose life matched his words, he was an exemplary role model dedicated to service to his students, his church, and society at large.

Giving Them Their Best Shot

While there, he was inspired to build a jungle school funded entirely by social media. Iturriaga started filming all the work done by PAMAS in the jungle, from medical missions, volunteer teachers teaching kids under the trees, and doing medical evacuation for those who needed immediate health assistance.

A day after launching the jungle school initiative, Iturriaga and the team were surprised to find out that they had already surpassed their goal of needed support.

PAMAS airlifted the construction materials, fathers worked together at the school site, and mothers prepared food, all playing a role in building the school. In three months, the school was established. It has two volunteer teachers teaching parents and kids in the community. Though only 30 students were expected, the school now has more than one hundred children enrolled.

PAMAS plans to build more schools as it continues to discover more communities in the jungle. To find out more about the Jungle Schools in Palawan, visit @pstrjasper on Instagram.

Picture Yourself Saving a Life Instead

It’s better to stop a person from bleeding to death at the scene of a traffic accident than to take photos and circulate them, Lincoln Edwards, president of Northern Caribbean University (NCU), said during the launch of “Stop the Bleed,” a training initiative that took place recently on the NCU campus.

Stop the Bleed educates people with no medical training on how to perform basic bleeding control, or B-CON, in order to save the lives of victims of traffic accidents.

Stop the Bleed is one of the largest public health campaigns in the United States. Bleeding out is identified as the main cause of death in many traffic accidents and other medical emergencies. NCU launched the program in Jamaica on Jan. 5, 2022.

According to national statistics, over the last 48 years, road traffic accidents have claimed the lives of 17,118 people in Jamaica.

In addition to the training, attendees were also registered to participate in a series of webinars in trauma and simulation in nursing education. At the end of the training, all trainees received certification and would be able to function as B-CON trainers, organizers said.

To learn more about the Seventh-day Adventist Church’s Northern Caribbean University and its programs and initiatives, visit NCU.edu.jm.

The pilot training class is designed to equip the local conference ACS Direct Response ministry teams with warehouse skills to respond in an emergency; these include the assessment of adequate staffing, rules of safety, inspection, and operation of forklifts. Participants also learned how to cultivate a culture of service, manage donations, and distribute donated goods and in-kind gifts. Participants who successfully completed the warehouse operations course will receive a certificate.

North American Division ACS is a founding member of Voluntary Organizations Active in Disaster (VOAD), which assists the U.S. Department of Homeland Security through the Federal Emergency Management Agency (FEMA) in disaster response. The warehouse operations training aligns with FEMA standards. Trained volunteers serve and train others within their local communities and other areas within the North American Division to respond to emergencies like the recent wildfires in Colorado.

A Brush with Fame

“Dr. Batten’s involvement as the medical director of our athletic training program will be key in ensuring student athletes receive the highest quality care in our community, the same orthopedic care the pros choose,” Adventist Health Simi Valley President Jennifer Swenson said in a statement.

The program includes six Ventura County and Los Angeles County schools and provides a full-time athletic trainer at each partner school. The trainers are involved in educating and helping students get interested in health care-related careers, in addition to keeping student athletes healthy and safe.

In addition to being a doctor for the Super Bowl champions, Batten is also the director of the Cedars-Sinai Kerlan-Jobe Institute Primary Care Sports Medicine Fellowship.

(Photo: King’s Kids, an Australian-produced children’s show that features children, puppets, balloon animals, storytelling and much more, is celebrating the premiere of its 100th episode on Feb. 18, 2022. Photo via Adventist Record.)