The passage of time can be measured by different clocks. If the clocks all agree, your chance of knowing the right time is better. While all human time is measured by the rotation of the earth on its axis giving us night and day, and the rotation of the earth about its sun giving us years, the measure of these days and years can be recorded in many different ways, such as tree rings, ice layers, and layers of soil depth or volcanic eruptions. Chronology can be deduced, for example, by the fact that if the streets of Pompeii are found covered by ash from Mt. Vesuvius and Pliny the Younger records that he was 17 years old at the event, and we know when he was born, we can date those ruins to AD 78 or 79.

Biological Clocks
If we know the night of sweet union of lovers, we can time the birth of their offspring to 9 months or 40 weeks or 280 days later, give or take a week. The human gestation clock.

But there are other smaller but ubiquitous clocks found in those human lovers. Each cell, each egg, each sperm carries information about its ancestry in the DNA of the cell both in the nucleus and in the mitochondria of the egg, mtDNA .

The DNA of different people is similar but not identical. Only identical twins have the same DNA.  And cousins and 4th cousins twice removed have even more differences. Random changes in the DNA come from a built-in design permitting random mutations, which are mostly corrected by built-in mechanisms for repair that correct most but not all changes. This design of the genetic system permits differences among individuals to happen over time. These mutations permitted cause some of us to have blue eyes and others brown, some light fair skin and others tan or dark skins, some of us to be tall and some short. This built-in possibility for random change, within limits, explains diversity in humans and all other creatures.

It is easy to count the differences between two individuals. The key issue is to know how often mutations occur, and it is clearly a topic that is not settled. But in the past 10 years these estimates are getting more and more refined and at least can give us some idea about when our common ancestors lived, using the DNA clocks in each human cell.

Eve and Adam
The important point is that genetic studies of human DNA, especially in the male Y chromosome and in the female mtDNA, have proven that all humans all over the world come from common ancestry. There is no evidence that S 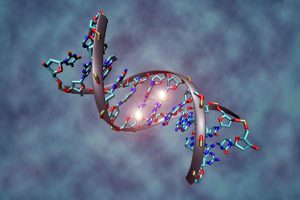 candinavians, Africans, Asians, or Eskimos came from different ancestors. The evidence shows that all mtDNA in women and all Y chromosome DNA in men come from a common source.  (You and I can call them Eve and Adam).

If we can count the genetic differences between two women or two men and know the mutation rate with some accuracy, then we can know how long ago our common Adam and our common Eve lived. The problem for creationists in the past was that the Eve was dated at 200,000 years ago and the Adam at about 60,000 years ago, but recent studies have tended to make those dates converge.

“The Y chromosome and the mitochondrial genome have been used to estimate when the common patrilineal and matrilineal ancestors of humans lived. We sequenced the genomes of 69 males from nine populations, including two in which we find basal branches of the Y-chromosome tree. We identify ancient phylogenetic structure within African haplogroups and resolve a long-standing ambiguity deep within the tree. Applying equivalent methodologies to the Y chromosome and the mitochondrial genome, we estimate the time to the most recent common ancestor (TMRCA) of the Y chromosome to be 120 to 156 thousand years and the mitochondrial genome TMRCA to be 99 to 148 thousand years. Our findings suggest that, contrary to previous claims, male lineages do not coalesce significantly more recently than female lineages.”[2]

So the DNA clocks can be interpreted to estimate Homo sapiens’ last common ancestor (origin or creation) at 150,000 (± 50,000) years ago, for both our mitochondrial Eve and our Y-chromosomal Adam. Just one more clock to check to time our earth and when the creation of humans in the image of God happened.

Archeology suggests that artifacts showing advanced cognitive abilities begin to appear about 70,000 years ago, if not before. So, placed together, DNA and archeology place Eden closer to 100,000 years ± 50,000 years ago.  You have no text in your Bible to contradict those numbers. “In the beginning” is a statement of fact, but not a date.

(This is the third in a series of five articles on how we can know the age of the earth and the creation of life on earth. Next: NATURAL CLOCKS, Part 4, Radioactive Clocks)

“Faith must go beyond Reason, but never against Reason.” Pastor Gregory A. Boyd
FOOTNOTES:

WHO WAS ADAM? Fazale Rana
WHY THE UNIVERSE IS THE WAY IT IS. Hugh Ross
COMMENTS ON THESE ARTICLES WILL BE OPENED WITH THE LAST OF THE SERIES. PLEASE WRITE DOWN YOUR COMMENTS AND SHARE THEM WITH US AFTER THE SERIES IS CONCLUDED.