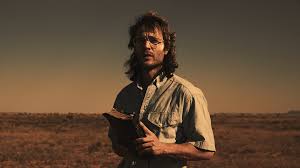 A television drama series entitled simply “Waco” will premiere Wednesday evening, January 24, on the Paramount Channel (called Spike in Europe and elsewhere) about the 51-day siege that resulted in many deaths of Branch Davidian cult members.

A young man who had been a member of the Seventh-day Adventist church assumed the name David Koresh. He had joined a faction of an Adventist spinoff sect, and wrested leadership of the group headquartered in a rural retreat outside Waco, Texas. Koresh drew a growing number of Adventists from around the world, convincing followers that he had a unique ability to interpret Bible prophecy, that women in the group were intended by God to be his wives, and that they must stockpile firearms and prepare for Armageddon.

After the United States government became aware of Koresh’s purchasing of  illegal firearms, federal agents investigated the Waco compound. In an ensuing firefight, officers were wounded and killed. After trying to negotiate with Koresh for 51 days, under massive media scrutiny, authorities used tear gas and armored vehicles to attempt to extract the shooters. The stand off ended with fire consuming the complex. Scores of Branch Davidians died, including children and Koresh himself.

During these events the Seventh-day Adventist denomination tried to disconnect the name of the church from the Branch Davidian splinter group.

The new television miniseries will have six weekly segments scripted and directed by experienced Hollywood producers John and Drew Dowdle. The project was originated by The Weinstein Company. Paramount took over the project in October 2017 and the Weinstein name will not appear in the credits, according to a January 15 article in Deadline.

The producers have said that the script for the series is based on two recent books whose authors served as advisors. Stalling for Time is a memoir by Gary Noesner, a retired Federal Bureau of Investigation agent who was an official negotiator during the stand-off. Waco: A Survivor’s Story was written by David Thibodeau, an ex-Adventist who was part of the Branch Davidians. Thibodeau was recently interviewed in a television documentary on “20/20”, on National Public Radio, and also quoted in Variety Magazine, Time, and the Boston Globe newspaper.

The tragic events in Waco were the cover story on the first issue of the Adventist Today magazine dated May-June 1993. Raymond Cottrell, the founding editor, explained in his first editorial that the events “altered our original plans for this, the first issue … in order to make room for the cluster articles on this topic, certainly one of major concern to the entire church.” The cluster included pieces by Cottrell, Noel Gardner, Antonius Brandon, Dalton Baldwin, and Dennis Hokama. (A digital copy of that magazine issue is available in the archives of our website, https://atoday.org/site/1/issuepdf/1993-01.pdf)